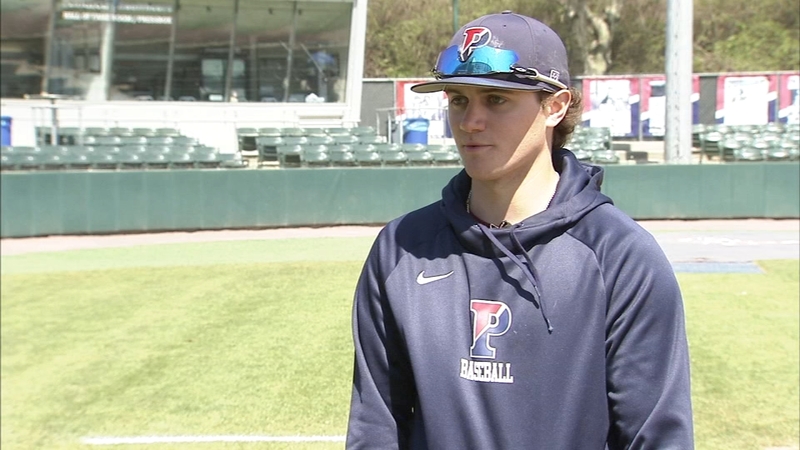 PHILADELPHIA (WPVI) -- University of Pennsylvania pitcher Kevin Eaise remembers the day his world was thrown into a panic in the blink of an eye.

Within a week, doctors discovered a tumor.

The 10-year-old boy immediately had brain surgery at Children's Hospital of Philadelphia.

"We had a perfectly healthy, happy kid playing baseball on a Sunday and by Friday, he was having brain surgery and hole drilled in the top of his head," Kevin's mother Debbie Eaise said.

Thankfully, the tumor was benign, but it was also inoperable because of its location.

So the Monroeville, New Jersey native still lives with the tumor in his head. But you would never know.

He's made a full recovery and today, he's one of the best freshman on the University of Pennsylvania's baseball team.

"If my tumor was any different or malignant, there was really nothing they'd be able to do. Looking back on it, you kind of get the perspective like I'm pretty lucky that I have what I have," Kevin said.

The irony of it all is that every time Kevin takes the mound at Penn, he does it in the shadows of CHOP, where he had his procedure and all of his appointments. It's a constant reminder how far he's come.

"I never take the exit without thinking about Children's Hospital, on our way to these games," his father said.

Kevin said found something he wrote while in 8th grade about seeing the Penn baseball field from the CHOP bridge.

"It's definitely been a part of my life," Kevin said.

Debbie Eaise said it has come full circle for the family.

"Because he's literally playing ball in the shadows of the place that saved his life," Debbie said.

Kevin is making a pitch to help others with the Eaise Family Foundation, which has raised more than $500,000 for brain tumor research at CHOP.