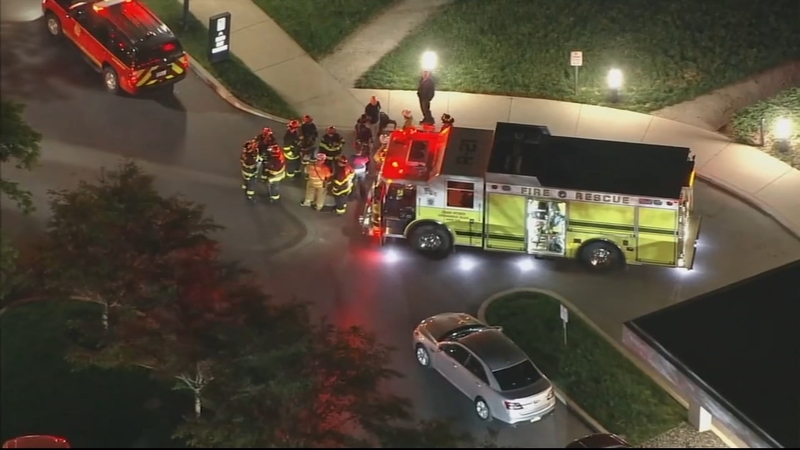 KING OF PRUSSIA, Pennsylvania (WPVI) -- Three people were injured when they fell seven floors down an elevator shaft during a fight at a King of Prussia apartment building Monday night, authorities said.

It happened at the 251 Dekalb Apartments on West Dekalb Pike at about 9:50 p.m.

Authorities said the men were involved in a fight on the eighth floor of the South Building. They crashed into the closed elevator door, causing the door to open.

One victim was found on the top of the elevator, while the other two crashed through the roof and ended up inside the car.

The men were taken to local hospitals for treatment of injuries. Two were transported to Paoli Hospital, while the third victim was flown to Penn Presbyterian Hospital, authorities said.

The victims are from King of Prussia, and range in age from 20 to 22. At least one lived at the complex.

Multiple injuries have been reported after an apartment building elevator plunged multiple floors on Monday night in King of Prussia, Pennsylvania.

"This is pretty unique. This was a different situation," said Upper Merion Police Lt. Al Elverson.

Elevator experts said safety measures could do little good in this particular situation.

"There's not much you can do when there are three full-sized big guys crashing into a door," said IUEC Local 5 Business Manager Joe Williams.

Williams said a union mechanic was actually called to the scene to assess the damage. He wanted to reassure people this type of thing doesn't happen often.

"A normal person bumping into an elevator door is not going to knock it off of its tracks," he said.

According to state officials, the elevators at the apartment complex passed safety inspections in November of 2020.

Anyone with information is asked to call Upper Merion Township Police at 610-265-3232.