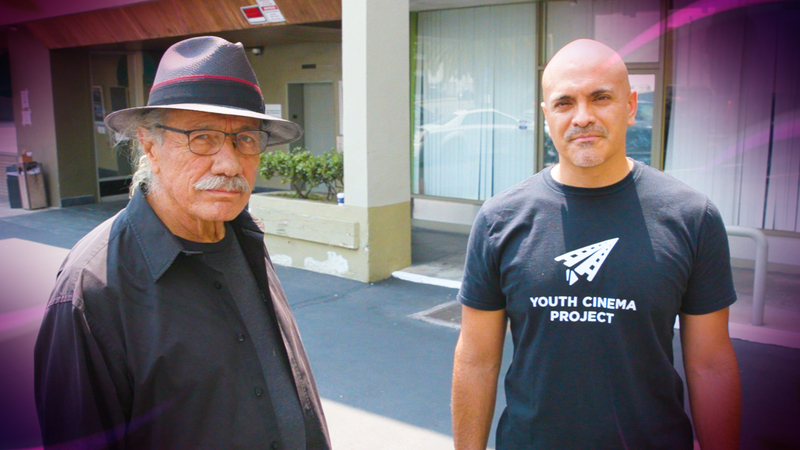 The film festival is now under the Latino Film Institute, which is also home to the Youth Cinema Project (YCP). YCP is now a program at dozens of school districts across the state of California.

"The way that the Youth Cinema Project was created is that we realized that the cavalry wasn't coming. No one was going to come save us, so we needed to save ourselves," said Rafael Agustín, a TV writer and CEO of the Latino Film Institute.

Two professional filmmakers mentor students, who can enroll once they reach fourth grade.

"It's the full school year, and they learn how to do all aspects of filmmaking and storytelling," Olmos said.

Kimberly Mendiola Leon of Bell Gardens, California -- now in high school -- participated in the program, which increased her confidence and reignited her pursuit of storytelling.

"Since a young age, I really liked writing. I remember I used to write short plays and make puppets out of like old socks and put them on for my family," said Mendiola Leon, who said she stopped believing she wasn't "good enough."

"When I joined YCP in middle school, I remember we had to write a script, and one of the mentors told me that he really liked my writing and that I should continue and he sees my he sees me being something in the film industry," she said. "That's what really got me going again into film."

Rafael Agustín, now a U.S. citizen, credits his immigration challenges for leading him to pursue a career as a TV writer. He aims to change the misrepresentation of undocumented immigrants.

"I always knew we were immigrants. I didn't know we were undocumented immigrants," Agustín said. "In high school, I was an overachieving immigrant student. I was the class president, the prom king, the top 10% of my class. Then I applied to go to college and discovered that I was undocumented," said Agustín, who thinks a more appropriate term is "undocumented American."

"Many years later, I asked my mom why she didn't tell me straight up. She said this line I steal from her all the time: 'We didn't want you to feel different because dreams should not have borders,'" he said. "I'm grateful for all my immigration problems because that's how I ended up in the arts. I was in community college without any direction, without knowing how long I'll be in this immigration limbo."

Agustín said he saw a study that found undocumented immigrants on television are less likely to hold jobs, less likely to be educated, and are more likely to commit crimes than their real-life counterparts.

"That just shows us that the narrative of undocumented Americans on TV is completely skewed," Agustín said.

"I think congressman Joaquin Castro stated it best when he said the El Paso mass shooting changed everything. If people are not seeing us as Americans, and as loving community members, [but] are seeing us as the other or as invading foreigners, then things like mass murder occur. And that's the exact reason why it's so important to see ourselves represented," he said.

"Someday I will not need to do a Latino International Film Festival. That'll be the happiest day of my life because everybody will be into watching films from all over the world. They'll be celebrating the contributions of Latinos, African Latinos, Africans, Asians, Indigenous," Olmos said.

"Our goal is to create lifelong learners," he said, referring to the Youth Cinema Project.

Agustín said the project also aims to send every student they work with to college.

"The icing on the cake would be anyone who wants to work in the entertainment industry, that we create those pipelines and platforms for them," he said. "That's what we're trying to do as an institute, as a Latino Film Institute. We're trying to create the pipeline, the platform and the launching pad from our community to the entertainment industry."