Lawyer: Philly female officers who sued will be protected 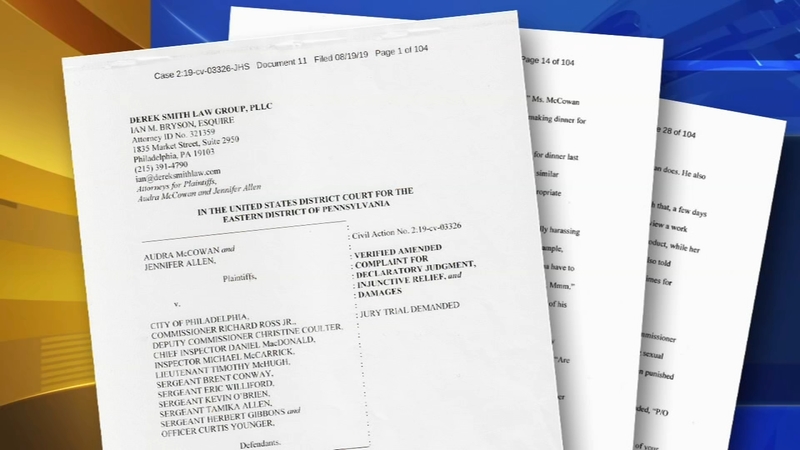 PHILADELPHIA -- Two female police officers whose sexual harassment lawsuit led Philadelphia's police commissioner to resign have received promises from the city they won't be retaliated against or endure more transfers while the case plays out.

Cpl. Audra McCowan and Patrol Officer Jennifer Allen say their complaints of being physically and verbally harassed by supervisors and colleagues were ignored for years by department brass. McCowan accuses outgoing Commissioner Richard Ross of failing to help because she had broken off a romantic relationship with him in 2011. Ross, in his first public comments Wednesday, denied any retaliation.

The women, in a lawsuit filed Monday, say that since raising gender- and race-based complaints, they've been assigned rotating shift work, given undesirable jobs, harassed over efforts to pump breast milk and suffered stress-related medical problems.

A court hearing set for Wednesday to address their concerns was canceled when the city agreed to stop the transfers. However, at the moment, both officers are out on medical leave, their lawyer said.

"They didn't want to be in those jobs, but we filed the motion so they wouldn't be moved again," lawyer Ian Bryson said.

Speaking outside police headquarters Wednesday, Ross said his abrupt resignation was voluntary and he has "never sought retribution on a person, personally or professionally." He did not comment on the lawsuit specifically.

"My love for this city has compelled me to make a decision that is bigger than me," he said. "Given the circumstances ... I just thought for the greater good of all citizens of Philadelphia, the fine officers here and the mayor, that it would be better if I just moved along."

Richard Ross speaks out after resigning as police commissioner during an interview with Action News reporter Walter Perez on August 21, 2019.

Kenney, a Democrat, noted a sexual harassment prevention policy and efforts to prevent workplace discrimination and harassment were implemented a year ago but said the department has not yet "taken the necessary actions to address the underlying cultural issues that too often negatively impact women - especially women of color."

He named a deputy commissioner, Christine Coulter, to lead the department on a temporary basis. Coulter, the first woman to serve in the role, is also a defendant in the harassment lawsuit.

Ross, who is black, joined the department in 1989 and had served as commissioner since January 2016. McCowan is black, according to the lawsuit, and Allen black Hispanic.

Bryson said they had not expected Ross to resign. However, he said the department had sat on complaints that in McCowan's case dated back to 2015.

The women graduated together from the police academy in 2004, then met up again years later in the Analysis and Investigations unit, Bryson said.

According to the lawsuit, male colleagues repeatedly touched Allen on the backside, made it difficult for her to breastfeed at work and allegedly tampered with breast milk stored in the office refrigerator.

McCowan, a supervisor, endured sexual come-ons and was passed over for needed training. After filing a second internal complaint in January, she was transferred to rotating shifts in the Police Radio unit, the lawsuit said.

The lawsuit alleges discrimination, a hostile work environment, retaliation and other counts. It says the women "have suffered continuous and ongoing sexual harassment and discrimination by both co-workers and supervisors," including groping, sexual comments and sexual advances, and that they faced retaliation for complaining about it.

The Associated Press generally does not identify people who say they are victims of a sexual assault, such as groping, without their permission, which Bryson gave on the women's behalf.