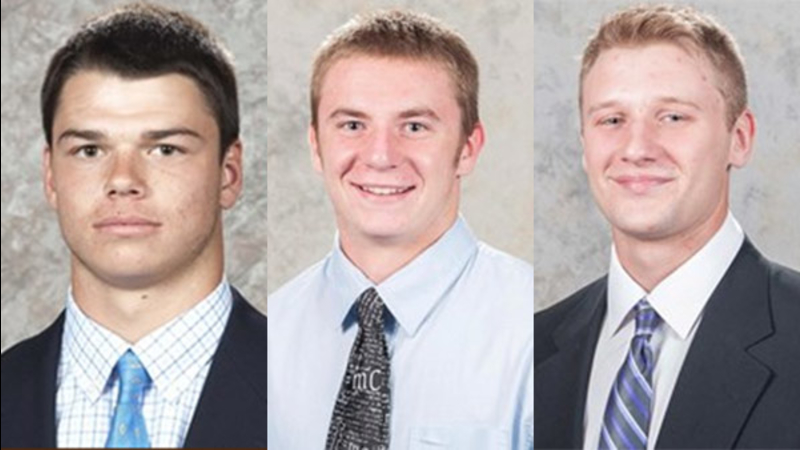 BETHLEHEM, Pa. -- Police say seven Lehigh University football players have been charged in an off-campus break-in meant as revenge, but they targeted the wrong home.

Bethlehem police say two men in the house used a university football roster to identify the suspects in the Nov. 8 intrusion.

They told police the men kicked in the doors as they slept and one was punched in the face.

The six are listed on the team's online roster.

Each is tentatively scheduled for a Dec. 30 preliminary hearing.

Police last month charged a seventh player, Brian Githens, for assaulting one of the men.

During Nov. 19 interviews with Lehigh University police, WFMZ reports four of the players admitted to entering the home. Parsons and Walker did not waive their Miranda rights and admit to going into the home, but the other players identified everyone who entered the home, according to court records.

Parsons is accused of urinating in the refrigerator.

Githens, a junior defensive back, faces burglary, simple assault and criminal mischief charges after the assault victim identified the 20-year-old from online photos of the football team. He allegedly burst into the man's bedroom and punched him twice while he slept.

Court records indicated the victim later sought medical treatment from a concussion and a split lip.

Githens allegedly admitted to police that the break-in was tied to an earlier assault on his fraternity president, but the retribution was targeted at the wrong home.

He also admitted to punching holes in the walls and identified most of the other players who went into the home.

Githens was released from Northampton County Prison Nov. 16 after posting 10 percent of $10,000 bail.

A university spokeswoman says the students' conduct is being reviewed.