LeSean McCoy meets with investigators, lawyer says 'he did nothing wrong' 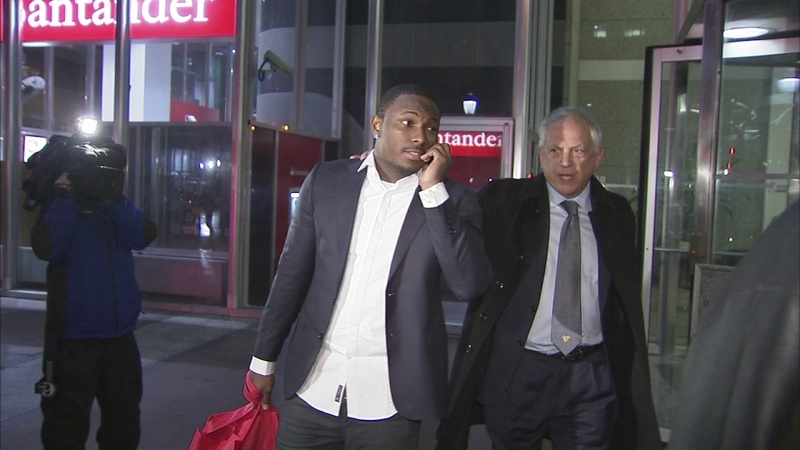 After the meeting, as the two exited the building, Cogan spoke to reporters.

""He'd love to talk to you. But I'm not letting him talk to you because there's an ongoing investigation and you're going to have another question for me, right? But I'm not going to answer any further questions because that's not what we're supposed to do. We don't want to try any of these matters in the press. And you're going to ask me a lot of questions, but there's not going to be any answer. But I don't want to play like I'm a running back and I'm going to roll over you guys because you guys are bigger than I am," Cogan said.

Cogan then repeated his stance that McCoy did nothing wrong.

"You've heard the statement that I made now and the one quote I have on the public record is exactly that, he did nothing wrong, but I'm not going to say any more about it," Cogan said.

Earlier, investigators from Central Detectives were spotted inside the lobby as they waited to go up to Cogan's offices.

Our understanding is that McCoy's defense team wanted to present to investigators their version of events. They have been doing their own investigation as they prepare for any criminal charges that might be filed.

A source tells Action News that McCoy told investigators one of the off-duty officers was the aggressor.

It's unclear what evidence they may have come across - if any - that contradicts the multiple cell phone videos that appear to show the melee inside the Recess Lounge in Old City on February 6th at 2:45 a.m.

Police say the Buffalo Bills running back and three friends got into an argument with three off-duty officers over a bottle of champagne.

Investigators believe the videos show McCoy and his friends punching, kicking, and stomping two of the officers- injuring them badly.

We spoke with Fortunato Perri Jr., who represents one of those injured officers. We asked what he made of Tuesday's scheduled meeting between the DA and McCoy's defense team.

Perri says, "The fact that someone may want to wander themselves into the District Attorney's Office and deny responsibility is of no moment to me. I'm confident that the District Attorney's Office will fairly review the evidence and charge whoever is responsible for this violent beating that occurred which resulted in serious, permanent injuries to two off-duty Philadelphia police officers."

Action News has obtained a photo of Officer Darnell Jesse, who was one of the officers injured inside the nightclub. In the photo you can see the injuries to his face - a cut above his left eye. It appears to have been taken the night of the incident in the hospital.

In this image Officer Darnell Jesse, who was one of the officers injured inside the nightclub, can be seen with injuries to his face.

Perri said the officers gave a statement to investigators the night of the incident, and met with them again to go over what happened.

Last week there were reports that the DA's office was not ready to issue an arrest warrant because of questions about the officers' conduct.

District Attorney Seth Williams said he would not talk about any evidence in an ongoing investigation, and that his office would carefully examine everything.

"The last thing anyone wants is a rush to judgement so, again, it is my job to get it right and not get it fast. I know there are some people who are clambering that I have it resolved one minute from now, and that wouldn't be the prudent thing," Williams said.

Video captured some of the melee.

FOP president John McNesby claimed Friday that McCoy sucker-punched one of the officers. McNesby says he cannot understand why the Buffalo Bills running back has not been charged yet.

"Extraordinary amount of time to be investigating an assault, an aggravated assault. The video is the video. The detectives, from all accounts, were done investigating this last week," McNesby said.

Perri says he's not concerned that there have been no charges yet.

"We're not concerned at all. Obviously, over the last few days, different video have surfaced and other individuals are being interviewed. We're confident that at the completion of the investigation, the district attorney will charge whoever is responsible for this beating," Perri said.

Investigators say the 3 a.m. fight erupted over which group had purchased a $350 bottle of champagne at the after-hours club. One officer suffered a broken nose and broken ribs while a second had a possible skull fracture.

McCoy's attorney recently told a Buffalo newspaper that his client did nothing wrong.