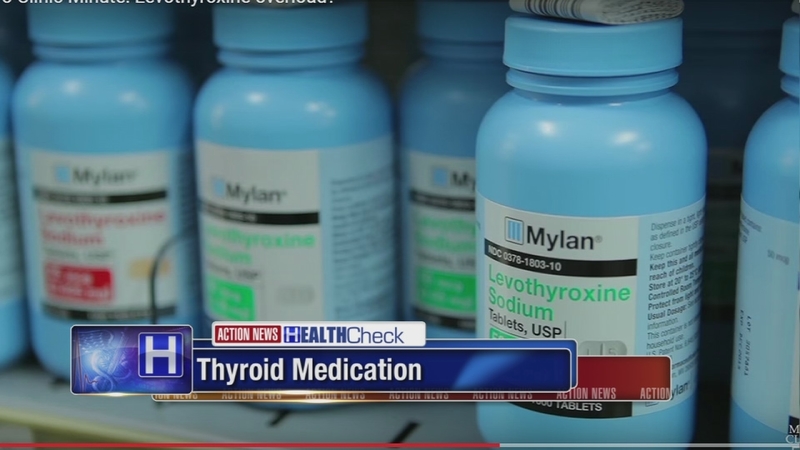 ROCHESTER, Minnesota (WPVI) -- The world's most prescribed medication may also be its most OVER-prescribed.

Every year, more than 120 million prescriptions are written for Levothyroxine.

The drug is designed to increase low thyroid hormone levels. But, a major European study raises questions about whether it's actually effective, and whether patients need it.

Experts at the Mayo Clinic say, based on the study, many patients don't need it.

They say the symptoms of under-active thyroid are vague, similar to other conditions, and common among people over the age of 65.

Furthermore, those experts said, once patients are on the drug, most doctors never check back to see if their symptoms really improve.

A team in Scotland, led by Dr. David Stott, a geriatrician at the University of Glasgow, decided to find out.

They conducted questionnaires with a total of 737 participants over the age of 65 in Switzerland, Netherlands, Ireland and Scotland.

The findings revealed that the drug was effective, lowering TSH levels to what is considered normal. The TSH levels barely budged among a group taking a placebo.

However, the drug did not improve symptoms that suggest thyroid problems, such as fatigue, weight gain and difficulty concentrating.

"We are tending to medicalize and rush to think we need to treat it," Stott said.

Dr. Juan Brito, an endocrinologist at the Mayo Clinic, said, "Some people really need this medicine, but not the vast majority of people who are taking it."

The doctors say colleagues treating older patients need to talk to them about sleep, exercise, diet, and other factors which may be the real source of their fatigue.

"And that is the key, to reassess. The majority of the patients get treated and never have a chance to withdraw from the medicine, and they just get treated for the rest of their lives," said Dr. Juan Brito of the Mayo Clinic.