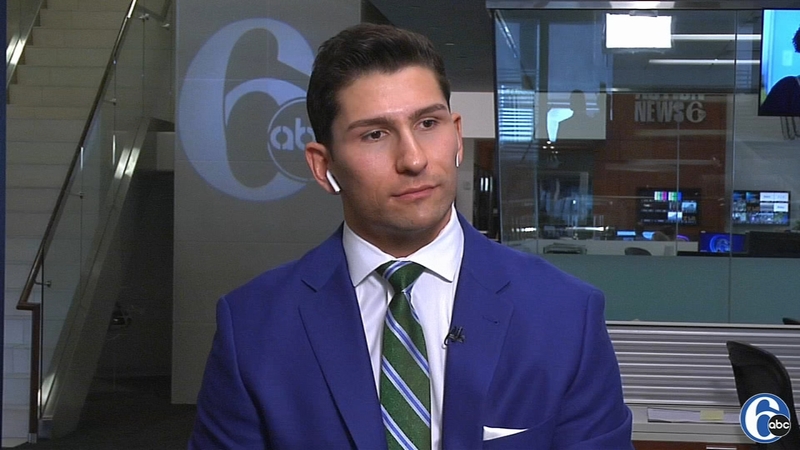 PHILADELPHIA (WPVI) -- Richard Holliday is rarely seen without his AirPods. They are an essential part to his overall presentation.

The "Airpod God" did not remove his fashion statement earbuds when he sat down for his interview with 6abc.

"Accessibility. It's 2020 we're looking at. My AirPods are necessary for me to function. If I get an important phone call during this interview, I am going to take it," Holliday said.

Major League Wrestling's Richard Holliday stopped by 6abc to talk about the event in South Philadelphia.

It's All About Marketing

South Philadelphia will be breathing rarefied air Saturday night when Holliday walks down the entranceway, with his AirPods, of course, and steps into the ring for Major League Wrestling's Fightland event.

The 27-year-old from New Haven, Connecticut portrays himself as a posh, arrogant superstar with superior intellect. His crisp look, complete with a stylish suit, is always on whether he's being interviewed by a Philadelphia digital producer or cutting a promo in front of a crowd of wrestling fans - or as he calls them consumers. It's a term, Holliday admitted, fans don't particularly approve of.

While Holliday has dreamed about being a pro wrestler since he was five or six years old, he majored in marketing and played college football. But those were never considered career options for him, they were more assets to add to his portfolio.

"Everything that I have done in my life has led me to this point, to be a professional wrestler," Holliday said.

It turns out, he discovered, everything in wrestling comes down to marketing, so his degree turned out to be a very beneficial idea. In fact, he calls himself the "Most Marketable" wrestler. Don't believe me? Just ask him.

"Professional wrestling at its core is marketing. In order to be successful, you have to be marketable. So there's a reason that MLW sent me to ABC News, to represent the company, because I can go on screen and speak about the company in an articulate level and present myself the best I possibly can," Holliday said.

Richard Holliday of Major League Wrestling stops by 6abc studios in Philadelphia, with AirPods of course.

Holliday is among MLW's pool of talent that includes those who have been in other promotions such as Low-Ki, Konnan, Savio Vega, and Davey Boy Smith, Jr. to others making names for themselves on the independent wrestling scene including Tom Lawlor, Mance Warner, King Mo, and Ross and Marshall Von Erich, who have a legendary family name behind them.

Holliday is joined in the MLW by fellow fighters that have a similar persona and attitude. They call themselves The Dynasty. Much like the Million Dollar Man Ted DiBiase or John Bradshaw Layfield did in WWE, the Dynasty makes it a point to show others that they are better in every way of life.

There's no question that what goes on in the ring is just as important to Holliday as his image. He has a move set that includes his patented Market Crash powerbomb that slams his opponents up in the air and down to the ring mat.

Holliday was the first student at the wrestling school of former WWE and WCW performer Paul Roma, a one-time member of the fabled group The Four Horsemen. Roma still says in touch, Holliday said, and is very proud of his accomplishments so far.

"I'm very grateful for my time with Paul. Paul has a very significant reputation in pro wrestling and I like that. I like the grittiness that he taught me and what comes along with that," Holliday said.

While Holliday likes Roma's legacy, he's not partial to the colorful history of the 2300 Arena, where he and the stars of MLW will wrestle Saturday night for a live taping of their Fusion TV show, which airs weekly on beIN Sports. Tickets are still available at MLW2300.com.

When asked if being inside such a hallowed venue means anything to him, Holliday, without hesitation, replied, "No."

He elaborated, as he does.

"Not at all. I didn't watch it as a kid. I didn't care for it. It means nothing to me. As far as I'm concerned, it's just big graffiti on a bathroom wall," Holliday expressed.

On Saturday night, whether he likes it or not, it is certain Holliday will step foot inside the former ECW Arena, but his challenger is still in question. He's wrestling a mystery opponent picked by Mance Warner in match a lot of wrestling fans look upon with anticipation due to the suspense surrounding it.

Holliday snidely remarked Warner will probably just choose someone off the street the last minute.

"Whoever that person is they better be prepared. They better be aware that they are going to be getting in the ring with a member of the Dynasty in Richard Holliday. I'm always prepared," Holliday said.
Holliday, who never once took out his AirPods throughout the interview, didn't receive that important call he was expecting, not even from his "lawyer-slash-father."

But he was 'kind' enough to admit that he paused his music to answer my questions.