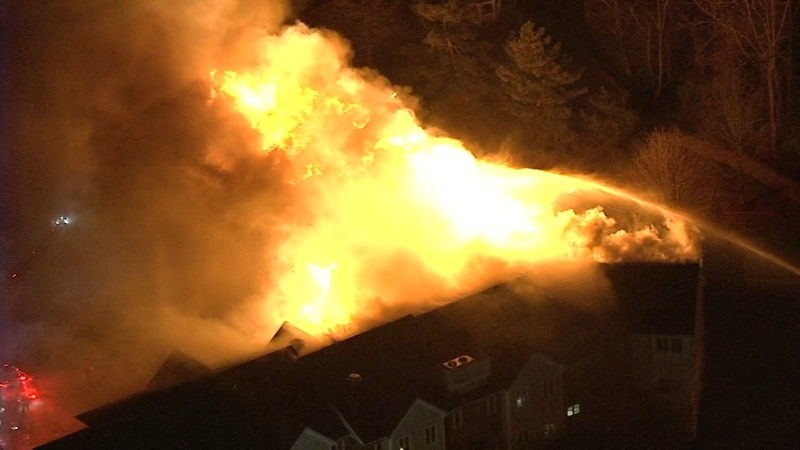 WEST CHESTER, Pa. (WPVI) -- A total of 27 people were known to have been injured in a massive fire at a senior living facility in West Chester, Pennsylvania, though investigators stressed they are still working to account for everyone involved.

Nearly 24 hours after the fire began on Thursday at 10:30 p.m., crews continue to douse hotspots at the Barclay Friends Senior Living Community.

Authorities said during a news conference on Friday that they were still working to locate all residents and staff of the Barclay Friends Senior Living Community on the 700 block of North Franklin Street.

At least 20 hurt in West Chester fire: Katherine Scott and Jeannette Reyes report during Action News at 6:30 a.m. on November 17, 2017.

Officials noted that people were scattered in the aftermath of the blaze, so it will take some time to determine if anyone is missing. It's believed some 160 people were in the building at the time.

"As you can imagine it was a little chaotic during the evacuation. There were some folks who were evacuated to West Chester University, some folks went home with family, so we're still trying to account for everybody," said Don Robinson of the ATF.

Of the 27 people who were known to be injured, 17 remained in the hospital by late Friday afternoon.

The cause of the fire is under investigation, and the ATF was on the scene even as the fire continued to burn.

The blaze was reported around 10:30 p.m. Thursday.

Chopper 6 was over the aftermath of a massive inferno at the Barclay Friends Senior Living Community in West Chester, Pa.

The fire quickly spread to multiple buildings and flames could be seen shooting from the roofs and windows of the structures.

Residents were forced to evacuate outside into the cold, with temperatures overnight hovering in the low 40s.

Watch Action Cam video from the scene of a major fire at the Barclay Friends Senior Living Community.

Officials said the inferno went to five alarms before it was declared under control at 1:22 a.m. Friday.

However, building continued to smolder well into Friday, and investigators say it could be Saturday before investigators could get access to the fire scene.

Video from Chopper 6 and the Action Cam showed dozens of residents on the lawn or along the street, wrapped in blankets. Many of them had been pushed in wheelchairs or rolled on beds to safety.

Larry Kingsland was amazed by the work of the first responders.

"They were running back in, right into the fire at that time. It was raging," he said.

But soon Kingsland and his neighbors realized the firefighters couldn't do it alone, so they ran in to help.

"Instead of waiting I just went in myself, and other people were going in the building and getting people out," he said.

He also described a checks and balance system that was happening to prevent confusion inside.

"One of the administrators from Barclay was in there putting red stickers on the doors as we were taking the people out, just to signify when the firefighters came in, in case it was smoky," said Kingsland.

Mary Meakim, a 101-year-old resident, described the night of the fire.

"That fire last night was horrible, all that smoke going up. I couldn't believe it," said Meakim.

She said she greatly appreciates the firefighters and neighbors who rushed in to help, along with the nurse who got her out of the building.

"The nurse came and she said, 'There's a fire.' She grabbed the oxygen off me," Meakim said. "I was shocked, I could not believe it. She finally put me in the wheelchair and we got out of there. Everyone was following us. She said, 'Come on, come on."

Mary was finally reunited with her daughter and granddaughter at the Pembrooke Center where she was taken Friday morning.

They had searched for her until 4 a.m. before finally getting a call that she was safe.

"We're thrilled to death," said Meakim's daughter, Kathleen Maloney. "It's a terrible thing the waiting. Every minute seems like an hour, but we're very thankful she was ok."

Action News has learned the Department of Health had once cited the home for fire safety violations. A building safety inspection reports stated "the facility failed to protect openings" with sealant. Fire caulking helps prevent the spread of flames.

Safety reports also reveal that the facility was cited for broken sprinklers, and emergency exits and halls were blocked. A critical question is whether fire suppression systems worked properly.

"It is an ongoing investigation so I can't speak to that specifically," said Charlene Hennessy of the ATF.

Although the facility had been cited, those violations were quickly corrected, according to inspection reports. Calls to a spokesperson for Barclay Friends for comment have not been returned.

According to its website, Barclay Friends offers various levels of care including memory care, skilled nursing, and post-acute rehab.

Watch Action Cam video of ambulances arriving at Paoli Hospital after a major fire at at West Chester senior community.