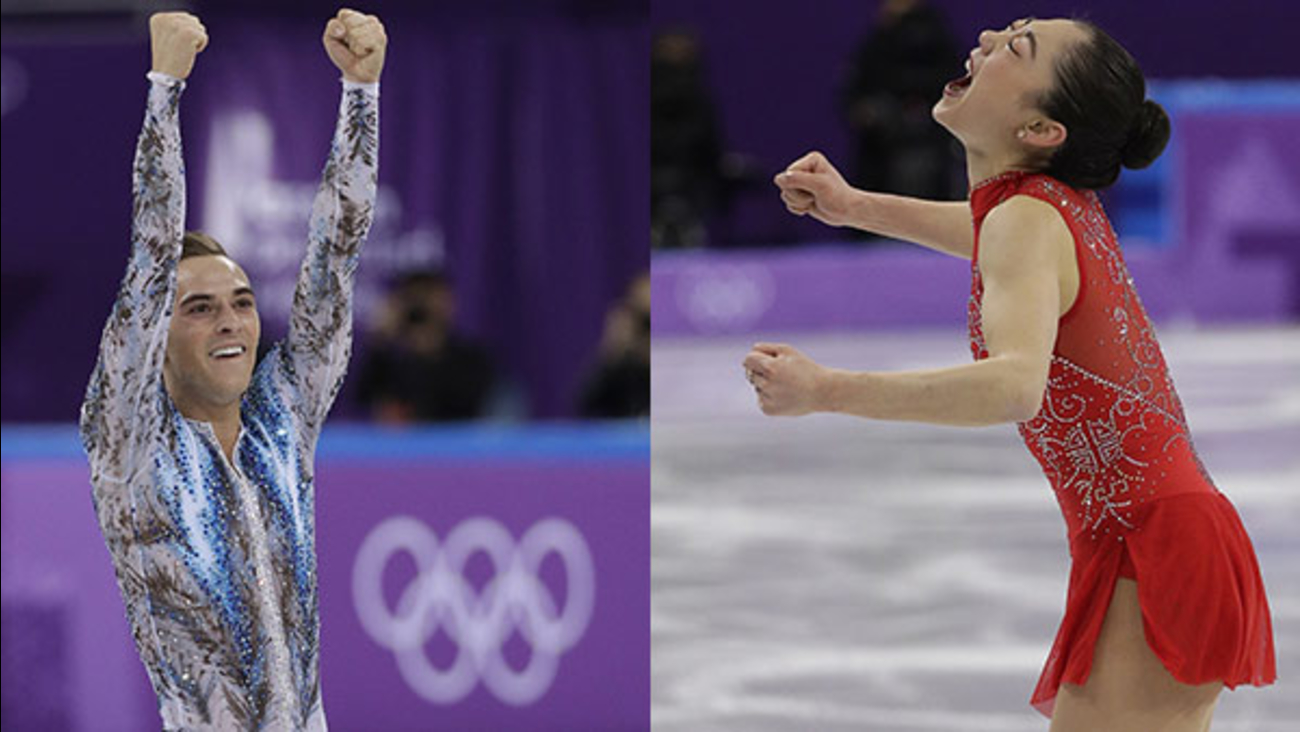 GANGNEUNG, South Korea -- Mirai Nagasu and Adam Rippon shared tears of sorrow when they were left off the Olympic team four years ago, each of them passed over in decisions that could have gone either way.

They shed tears of joy together Monday.

The veteran figure skaters put together flawless back-to-back performances, Nagasu becoming the first American woman to land a triple axel in the Olympics, Pennsylvania-native Rippon nailing both of his triple axels. They helped earn the United States the bronze medal in the team competition.

Canada won the gold medal, with the Russians taking the silver.

"For both of us to be on this team, and to be on the same floor in the village, it's all super exciting," Nagasu said. "He won't stop talking about how exciting this all is, and I go: 'Adam! Adam! You know we still have a job to get done? We still have to skate well!'"

They skated better than well.

It was Rippon who led off the final day of the team event, when the Americans were still in a nip-and-tuck struggle with Italy for the podium. The 28-year-old, wearing a sequined outfit that sparkled like a million diamonds, dumped a planned quad lutz but otherwise ripped through his routine with confidence and precision.

His jumps were sharp. His lines were smooth. His emotion, as usual, was worn on his sleeves.

Rippon thrust his arms out with a triumphant grin when he finished his program, basking in a loud ovation from a crowd filled with plenty of American fans. He then began skating circles on the ice, admitting later he wanted to spend as much time as possible before stepping off.

"It felt worth the 28-year wait, you know?" Rippon said. "I was sitting backstage and I thought: 'You know what? I still feel like I might throw up. And I might miss every element in my program.' But I said: 'You know what? I trained so hard and I know when I get out there I'm going to go for everything, take one element at a time,' and I was able to do that."

He finished with 172.9 points, less than a point behind Russian skater Mikhail Kolyada and less than seven points behind Patrick Chan, part of the winning Canadian squad.

More importantly, he finished ahead of Italian skater Matteo Rizzo to build on the U.S. cushion.

"We made a few changes with my coach and I was able to put together a strong performance," Rippon said, "but there's definitely a few points I want to squeeze out of this performance. I have one week until the individual and I'm going to be squeezing the hell out of it, you can believe that."

It's hard to believe Nagasu could squeeze much more out of her routine.

After finishing fourth at the 2010 Vancouver Games and getting passed over for Ashley Wagner four years ago for Sochi, the 24-year-old made a long-awaited return to Olympic ice. And she did it by etching her name in the record books with a triple axel for the ages.

Like a great locomotive, Nagasu began picking up speed the moment her music began, uncorking the same vexing 3-rotation jump on which Chan fell an hour earlier. She landed it to a roar from the American contingent seated at one end of the ice, joining Japan's Midori Ito and Mao Asada as the only female skaters to land the jump in Olympic competition.

"I could see my teammates standing out of excitement," Nagasu said, "and at that moment I wanted to stop the music and get off, but I still had my whole program ahead of me."

She somehow managed to calm her nerves, hit every jump the rest of the way and score a personal-best 137.53 points to finish second behind Russian star Alina Zagitova.
Her tremendous performance nearly clinched the bronze medal, and it became official when siblings Maia and Alex Shibutani took the ice for the free dance - the final event in the competition.

As the "Shib Sibs" twizzled across the ice, Rippon put an arm around Nagasu and kissed her cheek.