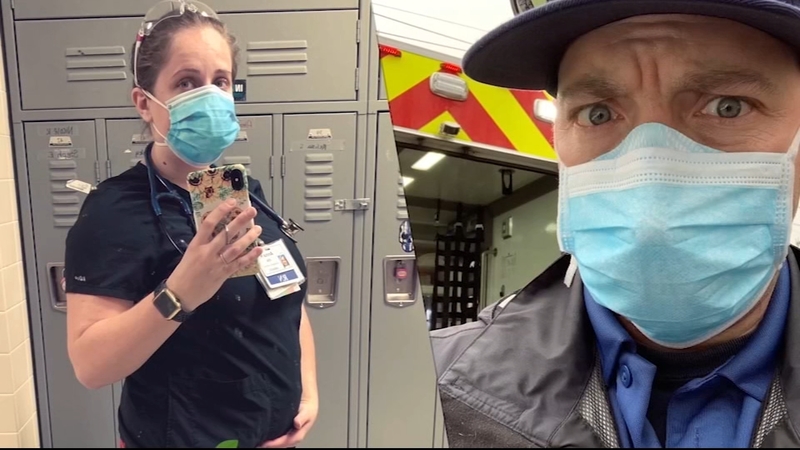 Healthcare couple battles illnesses together after birth of 1st child

MOUNT HOLLY, New Jersey (WPVI) -- As Kurt and Anna Recktenwald build their family together, the challenges they've faced as frontline healthcare workers dim in comparison to the last few months.

Anna is a nurse and Kurt is an EMT. In January, Anna was home after a shift in the ER.

"All of a sudden I lost my peripheral vision to the left," she said.

Anna was suffering from a brain bleed at 25 weeks pregnant.

Ten weeks after the initial symptoms, Anna was home and not picking up the phone. Luckily, her home security camera helped save her life.

"I found her (lying) on the floor, which stopped my heart," said Kurt, who called 911 after seeing the live picture on his phone.

EMS rushed her to the hospital. She was having seizures.

"That's when they decided to deliver him because when you have a seizure, you're not getting oxygen," she said.

The couple's son, Niko, was born on March 26. Both Anna and her baby were doing ok, but then Kurt's health took a turn this May.

Kurt is an EMT. Anna is a nurse. They've battled together on the frontlines of the pandemic, but now, they're in their own fight and need all the help they can get. Watch our Hometown Heroes this week on @6abc https://t.co/9mRwHxscWr pic.twitter.com/mjAXfQHtd8

"I thought I herniated a disk, so we went to the ER," recalled Kurt.

It turned out to be cancer.

As Kurt and Anna look to each other for strength, they have an entire medical community lifting them up too. Their friends have helped raise $17,000 for them so far, and money isn't the only support they're getting.

"I'm gonna fight this, but I'm not doing it alone, I have an army," said Kurt.

The couple has that army and little Niko. They're in the fight of their lives, but their lives aren't just their own.

"And we want to have more kids," said Anna.

"Yeah, we need to get him a brother or sister," said Kurt.