As they prepare for parade, Mummers honor members killed in South Philadelphia crash 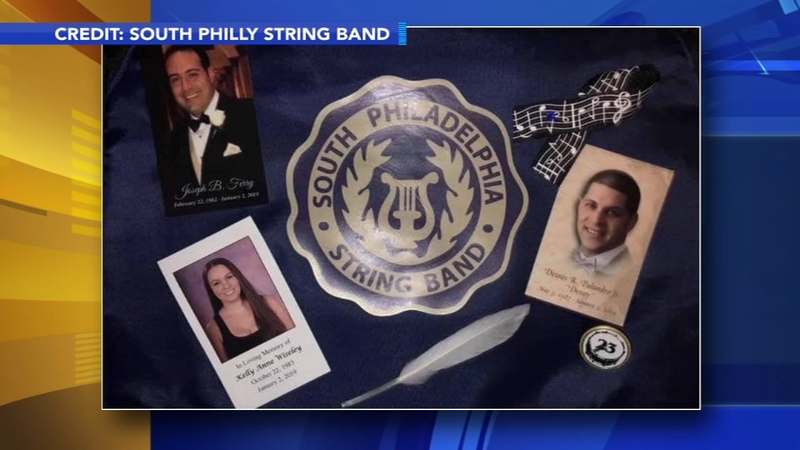 As they prepare for parade, Mummers honor members killed in crash

PHILADELPHIA (WPVI) -- The South Philly String Band has been hard at work preparing for the 2020 Mummers Parade, while also honoring the members they lost in a crash right after the 2019 parade.

The organization posted a preview of their upcoming New Year's Day performance on their Facebook page earlier this month.

On that same page, the band unveiled an emblem with the hashtag "For Them" with a black banner with the initials "DP," "JF" and "KW." It's there to represent string band members Dennis Palandro, Joe Ferry, and his fiancée Kelly Wiseley.

The trio was tragically killed by a driver who authorities said veered his car into opposing traffic causing the deadly collision.

Police identified the driver as 29-year-old Keith Campbell of Delaware. He was later charged with three counts of homicide, aggravated assault, and reckless endangerment. At the time of the crash, authorities said Campbell was suffering from possibly self-inflicted stab wounds.

Fast forward to the days leading up to this year's parade and the tributes to the lives lost have been front and center. The South Philly String Band unveiled a memorial locker for the two men, and the show of support hasn't stopped there.

Other clubs, who said despite their friendly rivalries during performance day, are taking time to remember their fellow Mummers.

The Golden Crown Fancy Brigade presented South Philly with their own special tributes.

"They presented a bear and a t-shirt and went out to tell them they're dedicating their presentation show to them. We're all family. Whether you're in the comics, the string band or the fancies, we're all Mummers and we're all in together and we're all brothers and sisters, and that's what this parade has always been about: traditions," said Bill Burke Jr. with Golden Crown.