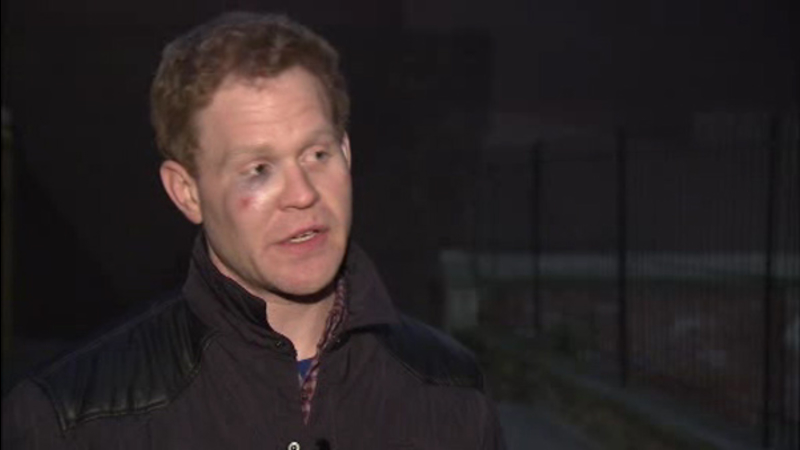 CENTER CITY (WPVI) -- The Mummers Parade was not without controversy this year with an alleged gay-bashing incident and critics leveling accusations of racism and homophobia over some of the acts.

The controversial comic act was Finnegans NYB's "Finnegan Goes for the Gold" featuring Bruce Jenner turning into Caitlyn Jenner as a Wheaties box was held side by side with a Froot Loops box.

The Mummers Parade was not without controversy this year.

"We were watching on TV, I said you guys this isn't going to be good. Then everyone around us agreed. We found the fruit loops box was really inappropriate," Robia Smith-Herman of Center City said.

Rich Porco, the President of the Comics Division, tells Action News there was "no intent to harm or degrade anyone with the performances. This sort of satire has been around for 116 years."

But video obtained by Action News reveals a much uglier side of someone who was marching with the Finnegans Brigade.

And it appears the hatred extended beyond the parade route.

"I turned over to the guy just to kind of say, 'cool your jets, buddy.' His buddy jumped in and clocks me in the face," Holtz said.

Action News spoke with George Badey, a spokesman for the Mummers Organizations.

@Anthony19145 @phl17 It was bad. Hurtful tomany Philadelphians. Our Trans Citizens do not deserve this type of satire/insult. #Berespectful

Badey says 99 percent of Mummers do not engage in offensive behavior and they have increased diversity this year.

But he acknowledges there needs to be more oversight.

Finnegans released a tweet saying it cannot be responsible for the actions of a few members.

We showed Badey the offensive video of the Finnegans member addressing parade spectators.

"That's categorically wrong and that shouldn't happen. And like I said, there are thousands and thousands of mummers and if one guy who was drunk said that kind of thing, that's not going to be tolerated," Badey said.