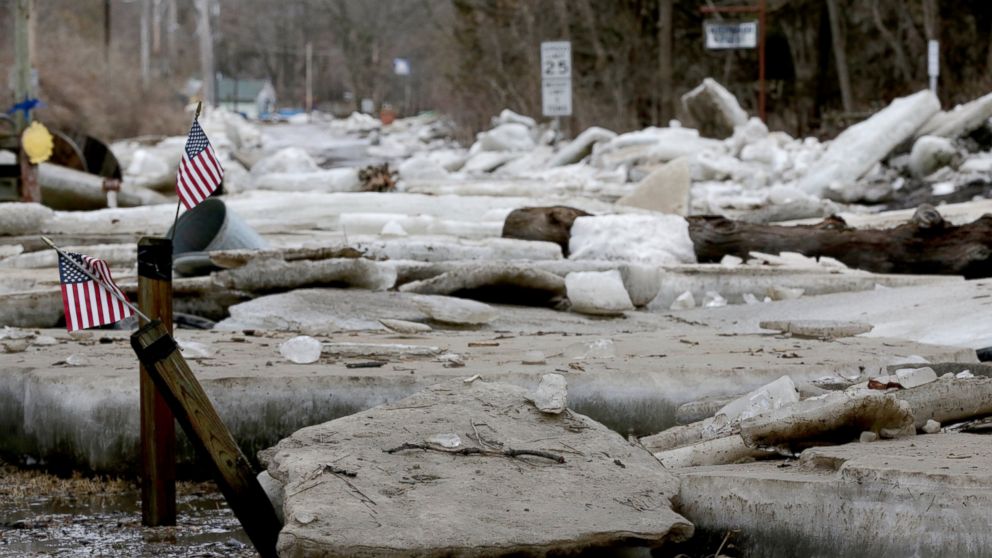 The flooding has caused parts of highways, including some bridges, to be washed away, isolating some communities.

The scale of the devastation near Niobrara, Nebraska, is unprecedented as the swollen Niobrara River washed away a dam.

Nebraska Emergency Management confirmed to ABC News that two people have died due to flooding.

On Saturday, Nebraska Governor Pete Ricketts tweeted an aerial video of the devastation, which showed trees, roads and structures underwater.

There are several other rivers in parts of Iowa, Illinois and Wisconsin that have risen into flood stage, including rivers near Milwaukee and Green Bay, Wisconsin, and Rockford, Illinois.

The American Red Cross is operating 22 shelters across the state, and the Nebraska National Guard had undertaken 111 operations as of Sunday morning, according to authorities.

There are widespread flood alerts in the Central Plains and Midwest for river flooding. The good news is there is no notable precipitation coming to the region through the week.

Brief snow from Illinois to Maryland

Nearly the entire country remains quiet in terms of weather, but there is a compact, quick-moving disturbance moving through parts of Illinois and Indiana on Sunday morning. This disturbance will struggle to draw in much moisture, but as it slides off toward the Mid-Atlantic it could drop a quick period of snow from Illinois to Maryland.

Some of the moisture will be in parts of Ohio and Kentucky by Sunday night before reaching parts of the Washington, D.C., metro area on Monday morning.

Accumulation will not be significant, however, the system could cause a few slippery spots over the next 24 to 36 hours in the region.

High pressure remains firmly in control over much of the U.S. this weekend and will persist for a couple more days. Storms traversing the Pacific will be forced into southern Canada until the high pressure systems dominating the West finally ease up.

The result of this is fairly mild weather across much of the country, including a good deal of sunshine.

Much of the West will see a gradual increase in temperatures the next few days, with some of the most comfortable weather in months for the region.