USA Hockey says female participation has grown by 34% in the last decade.
WPVI
By Beccah Hendrickson and 6abc Digital Staff 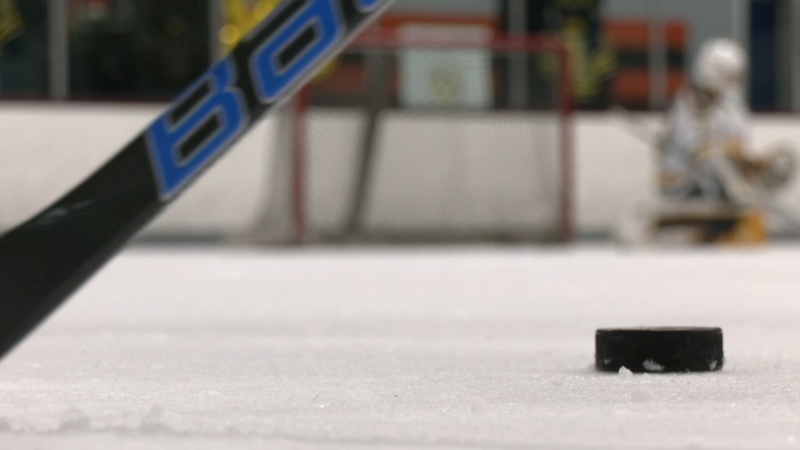 Women's ice hockey team reaches out to next generation of players

ASTON, Pennsylvania (WPVI) -- The women's ice hockey team at Neumann University reached out to elementary school-aged girls in the community Saturday, hoping to recruit them to the sport.

The team invited kids from Drexel Neumann Academy to their senior game at Ice Works in Aston, Delaware County. They first served them lunch and allowed them to participate in a question and answer session with the coach and players, then let them sit on the bench during warm-ups and get a front-row seat to the game.

"That work ethic that you put on the ice, it goes into other things as well, like school and your career, so it teaches a lot of life lessons that can be used later on in life even when you stop playing," said Victoria Maloney, junior on the team.

Maloney took time to speak with second-grader Prisceda Hickman before the game.

"I wanted to see the game today, so my mom signed me up so I could come," Hickman said.

Several of the players are alumni of Snider Hockey, a program that has girls ice hockey teams. Snider also helped organize this event.

"Try something once and see if you like it, so just giving them the opportunity to see it at a young age and try it at a young age, they can pick and choose whether they like it," said Gina McLaughlin, the head coach of Neumann's women's ice hockey team.

Girl's and women's ice hockey is one of the fastest-growing youth sports in the country. USA Hockey says participation has grown by 34% in the last decade.

"It's about having fun and putting everything out there, so I really want to see the sport grow for girls," said Maloney.

Visibility for women's ice hockey has never been higher. The US women's national team just won the silver medal at the Olympics, and proponents of the sport say now is the time to recruit.

"I think it's just the visibility, being able to see it and knowing that you can do it," said McLaughlin.

Her team hopes to prove to girls that hockey is meant for them too.

"People thought girls shouldn't play hockey, but a lot of time, we can play harder, sometimes even better than the guys," said Jasmine Martinez, a senior on the team.