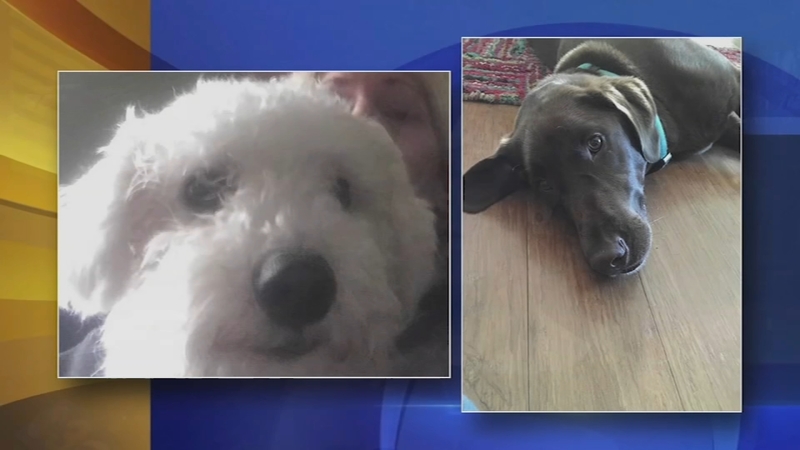 FRANKLIN TOWNSHIP, New Jersey (WPVI) -- Police in Franklin and Monroe townships in New Jersey are investigating a case of animal cruelty after a family found two dogs dead two days in a row.

One, they say, was clearly attacked by someone.

Cruiser, an Australian mini shepherd, wandered his yard in Franklin Township when Action News visited on Friday afternoon. It's a yard he used to share with two canine friends.

"He comes to the door waiting for the other dogs to come out, still. It's very sad," said Jessica Brown.

She recounted the awful discoveries made in her family's yard on Janvier Road last week.

First, their 3-year-old Bichon Frise, Bean, was found dead with no explanation.

They thought Bean's death was from natural causes.

But the very next day - on Halloween - their chocolate lab, Tank, was found with several slashes in his neck.

"My parents noticed him bleeding a lot and coming up to the porch, and he was rushed to the vet where unfortunately he had to be put down due to the extent of his injuries," Brown explained.

Detectives came out to the property to investigate after Tank's death. Now the family suspects Bean may have been poisoned.

This week the Browns say they saw a man in camouflage lurking behind their property twice.

"Cops were called every time this has happened. But unfortunately every time that they come out there they can't figure out what's going on," said Brown.

For now, the Browns are being extra vigilant, even putting up a smaller fence so Cruiser can't get to the back of the yard. And he never goes out alone.

"At this point it's very hard to understand what is going on and why someone is doing this," said Brown.