N.J. waitress speaks out over anti-immigrant message on receipt 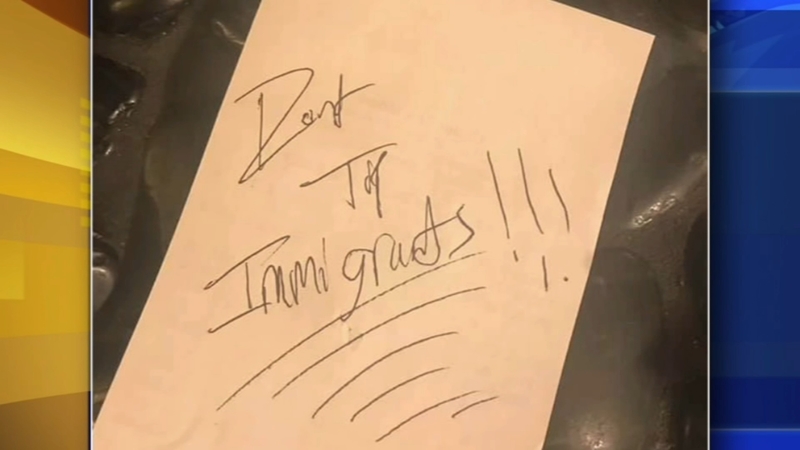 Disturbing message left on back of receipt at Bordentown cafe

Those three words written on the back of a restaurant receipt has a Burlington County waitress speaking up.

It was closing time at the Under the Moon Cafe in Bordentown last Thursday and Lorena Bossi was waiting on a couple who had only ordered dessert.

Bossi tells Action News she thought everything was fine until, she says, she began speaking to another employee.

"I spoke Spanish to him. I thanked him because he was helping me clean up because he doesn't have to do that," she said. "It was so weird that they had just transitioned from loving me as a person to all of a sudden, 'Oh, she speaks Spanish? She must be an immigrant. Let's leave.'"

Santiago Orosco, the owner of the Under Moon Cafe, and an immigrant himself, called the customers' actions "totally unacceptable."

Orosco was so disturbed by what unfolded that the self-made entrepreneur posted a message to Facebook, saying this type of behavior would not be tolerated at his restaurant.

"Immigrants are a huge part of our country and our society. And one of the reasons I'm doing this is to stand up to them and show them another side of the immigration," he said.
Ironically, Bossi is a second-generation American. Her family is from Uruguay and she grew up in the U.S. speaking two languages.

Bossi says it was the couple's first time at the restaurant and they paid in cash.

She says it was never about the tip. It's about the harsh words on the receipt.

"It was solely the fact that they wrote that comment on the back," Bossi said.

But Bossi says she holds no malice toward the couple for what she calls ignorant behavior.

"If the couple does return, I'm going to continue to be the kind person that I am," Bossi said. "I'll treat them with the same service as the first time because I'm not going to let someone's hate fill my heart with hate because that's not how I was raised."