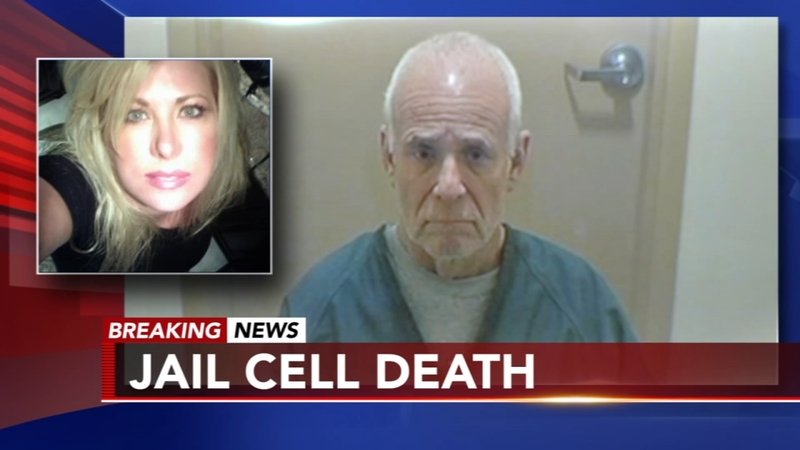 KEARNY, N.J. (WPVI) -- A New Jersey doctor accused of arranging the slaying of his radio host wife to keep her from exposing a drug distribution ring he was running with an outlaw biker gang was found dead in his jail cell Friday in an apparent suicide.

Sources tell Action News Kauffman left a lengthy note. He was found face down with a sheet around his neck, sources say.

Kauffman was charged with arranging the 2012 killing of his wife, April, to prevent her from exposing an illegal drug distribution ring he was running with the Pagans biker gang.

He had been the subject of death threats after his arrest, prompting his transfer from the Atlantic County Jail in Mays Landing, New Jersey, to the Hudson County jail, near New York City. Authorities said the switch was made for his own protection.

A co-defendant in the case also is charged with trying to have Kauffman killed behind bars to prevent him from coming to trial.

Kauffman, 68, of Linwood, New Jersey, and co-defendant Ferdinand Augello, 61, of Petersburg, New Jersey, were arrested earlier this month and charged with murder in the death of Kauffman's 47-year-old wife, a local radio talk show host who advocated for veterans and who had won a community service award from the governor days before her death.

April Kauffman's daughter, Kimberly Pack, believed her stepfather was guilty and filed a wrongful death lawsuit against him in 2014. Attorney Patrick D'Arcy, who filed that lawsuit, spoke on her behalf Friday.

"He certainly, I think, knew the evidence was mounting. I'm sure he listened to what the prosecutor had to say and he made another choice," said D'Arcy.

April Kauffman's daughter addresses media after her stepfather, James Kauffman, was charged with murder on January 9, 2018.

Sources tell Action News that Kauffman was alone in his jail cell because his bunkmate had left for a court appearance.
Atlantic County authorities said an investigation is continuing and declined further comment.

Authorities say Kauffman arranged for his wife's murder to keep her from divorcing him in 2011 and exposing a lucrative drug ring he was running with the Pagans Outlaw Motorcycle Gang through his endocrinology practice.

Atlantic County Prosecutor Damon Tyner said Kauffman told Augello about his wife's threats and solicited him to have her killed. After about a year, a man who agreed to do it, Francis Mullholland, was driven to the home, where the doors had been left open, and was given a gun, authorities said. April Kauffman was shot twice.

Mullholland, who got about $20,000 in cash, was later found dead of a drug overdose, Tyner said.

Investigators say Kauffman continued to run the drug operation even after his wife's murder. That all ended after his arrest in June, 2017 on weapons charges.

That incident, included a standoff with police when authorities executed a search warrant at his office.

Dramatic body camera video from police showed him pulling a weapon and threatening to kill himself. Defense attorney Ed Jacobs said his client was reacting in fear that he was being arrested for the murder of his late wife April Kauffman during the June incident.

Jacobs says Kauffman told this to police at the time: "I'm not going to go to jail for something I didn't do."

Prosecutors also have charged Augello with planning to kill James Kauffman before he can go to trial.

Augello has maintained his innocence.