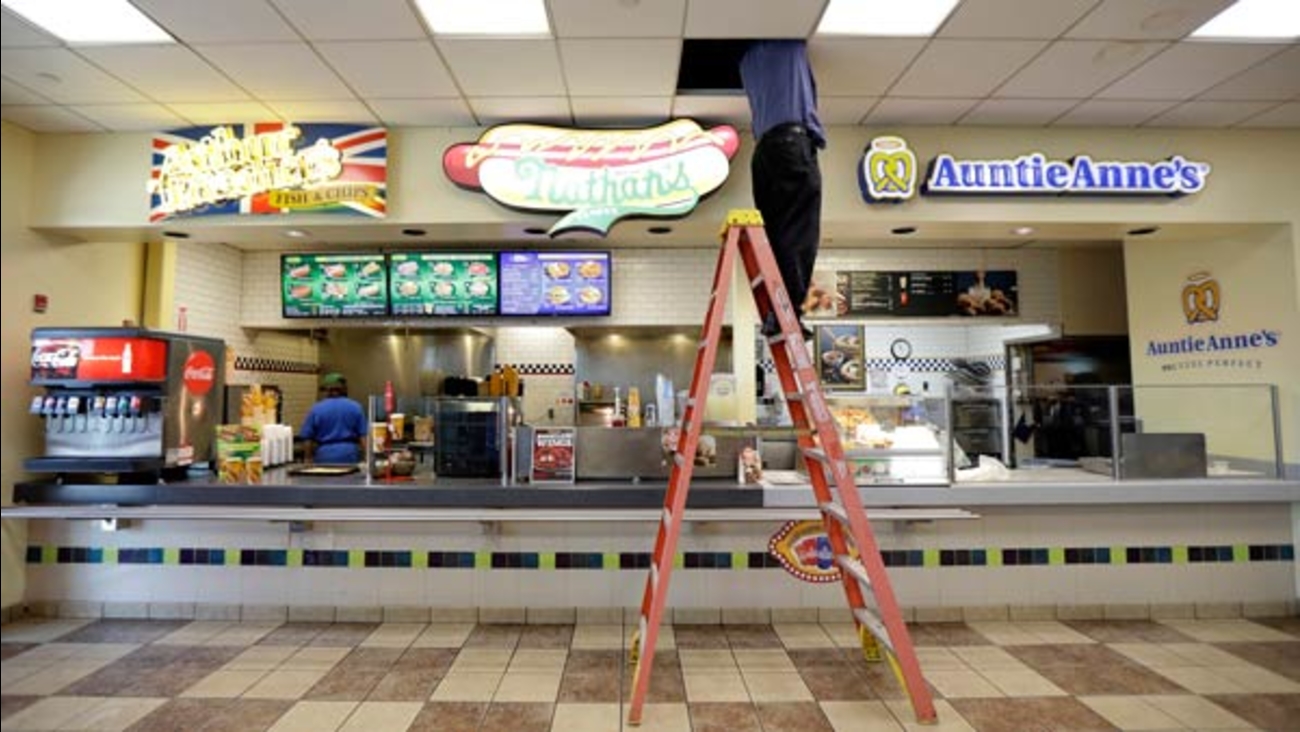 In a photo taken Thursday, Sept. 21, 2017, an employee on a ladder works inside the service building at the Cheesequake Rest Area in South Amboy, N.J. (AP Photo/Julio Cortez)

TRENTON, N.J. -- For hundreds of thousands of weary travelers driving along the East Coast, the numerous rest stops that line the New Jersey Turnpike and Garden State Parkway offer far more than simply a place to take a restroom break or have a small meal.

The rest stops have become meeting places where groups of relatives or friends often headed to New York, Philadelphia or Washington, D.C. can come together for the final leg of their trip. The structures can play starring roles in tales of family trips both recent and long ago.

So when New Jersey Republican Gov. Chris Christie announced last month that the state's aging rest stops would be getting major makeovers, many travelers welcomed the news but said they felt a sense of loss after learning that change was coming to their beloved sites.

"Progress is always a little bit of a betrayal, but I guess in time the new rest stops will get the layer of grime and exhaustion that makes the old ones so tragically wonderful, and it will all be OK again," said Helen Rosner, who along with a friend recently traveled the turnpike to rate each rest stop on that highway for the website Eater .

The planned makeovers are part of a deal in which the state will give Sunoco and food service firm HMS Host a 25-year contract at the turnpike and parkway in exchange for the companies covering the $250 million renovations. No taxpayer funds or toll money will be spent on the work. The agreements were approved by the New Jersey Turnpike Authority's Board of Commissioners this month.

The stops due for makeovers include the Vince Lombardi, Thomas Edison, Joyce Kilmer, Walt Whitman, Clara Barton, and John Fenwick service areas on the turnpike, and the Forked River and Monmouth service plazas on the parkway.

The Thomas Edison and the Monmouth stops are scheduled first for makeovers, officials said. Construction on those sites is to begin next year and be completed in 2019. All of the new and renovated buildings are expected to be in place by 2024.

Sunoco will take on the responsibility of maintaining the underground fuel storage tanks in the service areas, while HMS Host will maintain the restaurant buildings. Those duties had been NJTA responsibilities under past contracts, authority spokesman Tom Feeney said.

All 12 rest stops are named after well-known figures with some sort of connection to the state, including presidents, lawmakers and a poet. Many were constructed in the 1950s and need updating, officials say.

In announcing the makeovers, which he called "long overdue," Christie said the rest stops often provide people with "their first impression" of the state.

The agreement calls for HMS Host to invest in 14 service area restaurant facilities and construct eight new restaurant buildings, which will cost between $10 million and $15 million each in addition to refurbishing six other buildings, at an average cost of around $4 million each. The rehabilitation of all restroom areas is also included in the rest stop investment.

Sunoco is covering gas station improvements and will build a convenience store at the Brookdale North Service Area on the parkway, which currently only has a gas station with no public restrooms. It also will build a convenience store to replace the main restaurant building that is being torn down at the Alexander Hamilton Service Area on the turnpike.

"I will be glad to see new facilities in place," Jody Marquez said while sipping coffee at the Monmouth Service area in Wall Township last week. The 40-year-old Brooklyn, New York, resident said she's a frequent traveler on the parkway and turnpike because most of her extended family lives in towns near the Jersey Shore.