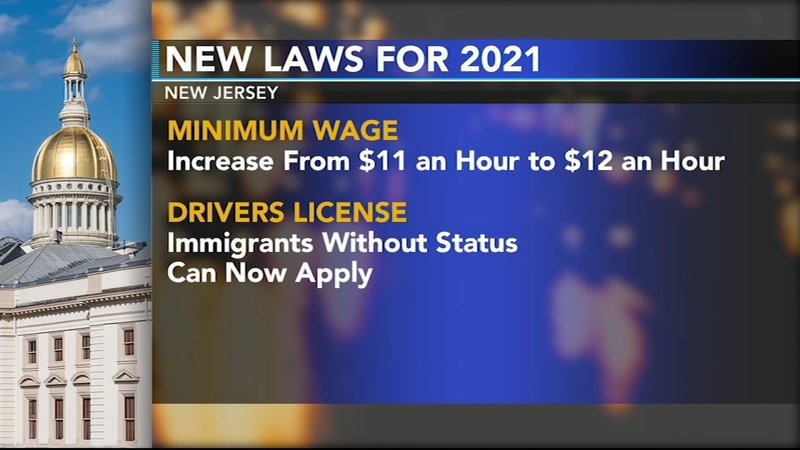 TRENTON, New Jersey (WPVI) -- A New Year means a new start and in a lot of places, a new set of rules and laws.

In New Jersey, residents are reacting to a law that legalizes recreational marijuana. But while marijuana will be legal in the Garden State, there is still no frame work or timetable on when people can actually start buying it.

"Like a lot of people say it is only weed, so I am glad about that," said Tristen Jones of Cherry Hill.

"If it is going to help the state do better things and fix the roads and have better programs, and help people be put in better positions, then I am all for it. If is just going to keep things the same, then I am against it," said Tenisha Cooks of Cherry Hill.

" I think it is pretty good. I think we deserve more but it is a step. You have to start somewhere and it is slowly going up," said Lanaizha Rolax of Sicklerville.

New Jersey is increasing minimum wage from $11 to $12 an hour.

In 2021, Governor Phil Murphy is also giving the green light for undocumented immigrants to apply for a drivers license and new legislation would allow residents who have not committed a crime in 10 years or more, to petition for their criminal records to be erased.
If you live in Delaware, a new environmental law there bans single-use plastic carry out bags. The hope is that it will cut down on litter and the amount of plastic in landfills.

"I just think too many people just trash them. I reuse them and I use them for everything but they just trash them. I have watched people come out of stores and just drop them in the streets and that is not good," said Lee Newman of Wilmington.

Changes to laws in Pennsylvania include the Move-Over Law. Pennsylvania's Move Over Law requires drivers to slow down and move into a lane not next to an emergency response area when an emergency vehicle has its lights flashing and where road crews or emergency responders have lighted flares, posted signs, or try to warn travelers.

Drivers approaching an emergency response area who are unable to safely merge into a lane further away from the response area must slow to at least 20 mph less than the posted speed limit.

Also in 2021, you must now be at least 18 in order to get a marriage license. In the past, you needed court approval, if you were under 16 and parental consent if you were between 16 and 18.

In response to the killing of George Floyd while in police custody, in Minneapolis, the state is enacting some police reforms. This includes strengthening police training on use of deadly force and de-escalation tactics. The new law, also requires mental health evaluations and more due diligence when hiring officers.

Toll increases go into effect on the Pennsylvania Turnpike this weekend, along with a hefty surcharge on drivers who don't use EZ-Pass, officials are reminding motorists.