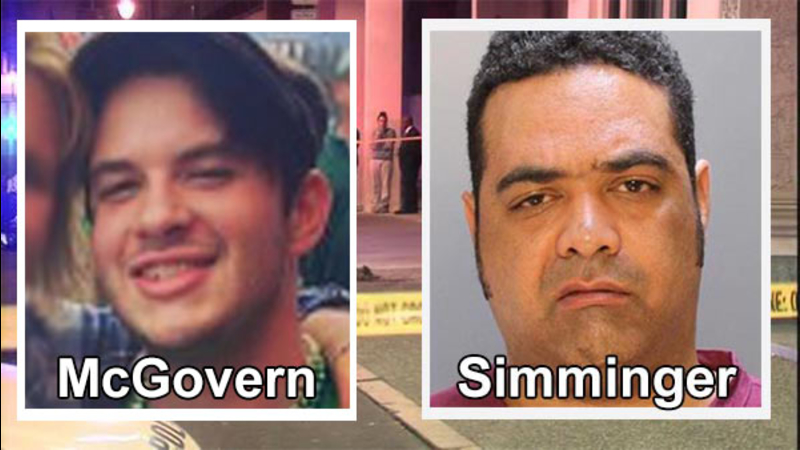 RITTENHOUSE SQUARE (WPVI) -- Police say a comment about a hat led to a fight in Philadelphia's Rittenhouse Square, which left one man dead and another man charged with murder.

Steven E. Simminger, 40, was arrested and charged with murder in the death of Colin McGovern of Churchville, Pa.

Police say McGovern and three of his friends were out celebrating St. Patrick's Day. They had taken a cab to the 1800 block and got out to look for a hotel after a night of bar-hopping.

Capt. James Clark of the Homicide Unit said during a news conference Monday that Simminger was walking past the group when a comment was made about his hat with a New Jersey Devils logo. 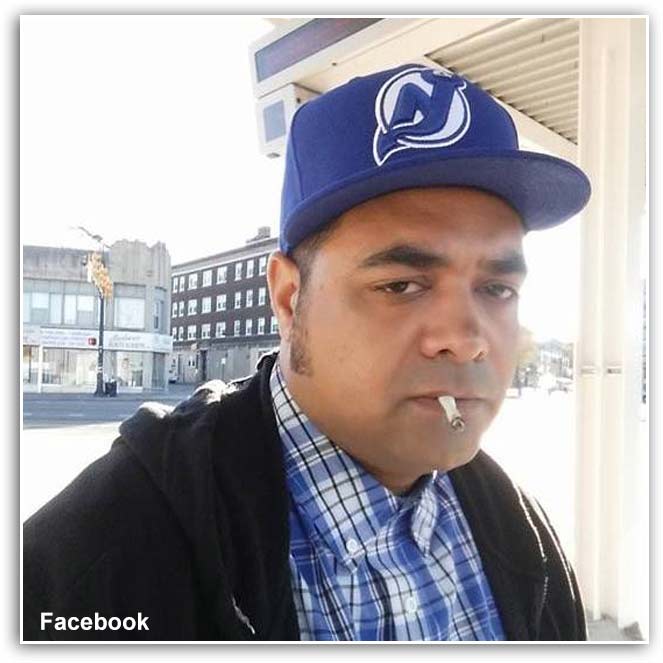 Surveillance video shows Simminger turn and walk back to the group, Clark said, which leads an argument and then a fight.

They go to the ground, Clark said, with McGovern on top of Simminger. That's when Simminger allegedly pulled out a knife and stabbed McGovern.

McGovern was taken to the hospital but was pronounced dead a short time later.

Simminger fled the scene, police say, but around 7 a.m. the Gulf War veteran went to a VA hospital to be treated for cuts to his hand and to be "mentally evaluated."

Simminger allegedly told hospital staffers he had been in a confrontation. Police were called and Simminger was taken into custody.

Two knives were recovered, Clark said, and one is believed to be the murder weapon.

Simminger is from Blackwood, New Jersey. Police earlier said he was from Media, Pa., but later said that was a relative's address.

"That doesn't sound like Colin to be in an altercation," said Charles Craige, a neighbor and spokesman for McGovern's parents. "It's very shocking." 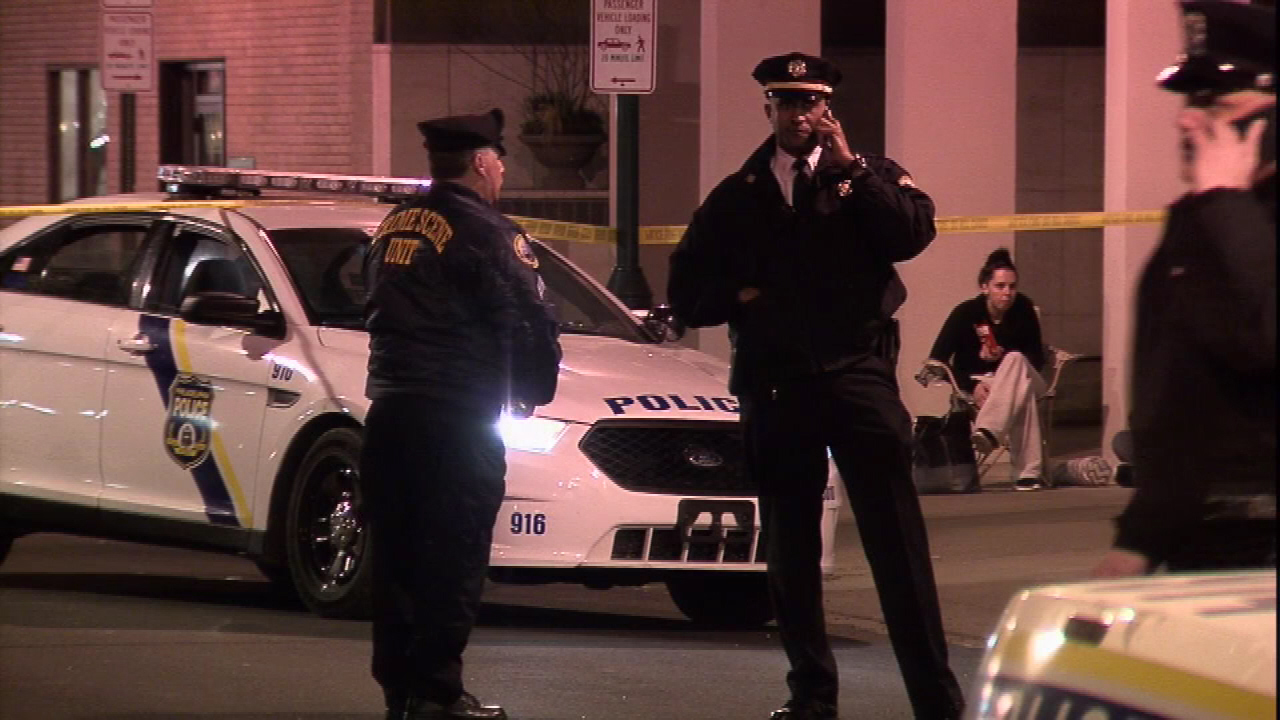 Sources tell Action News police have a suspect in custody in connection with a stabbing attack that left a 24-year-old man dead on Rittenhouse Square.

Action News spoke with one bystander who ran over and put pressure on the wound, trying to keep him calm.

"And I just tried to help him keep breathing and talked to him a little bit," said Megan Hellander. "I just said, 'the ambulance is coming, they're coming to help you.' "

People we spoke with were alarmed about the attack in this seemingly safe neighborhood.

"I walk through here every morning," said Paul Gallagher of Rittenhouse Square. When my dog's up here, we take him for a walk, but I've never felt unsafe."

"I walk home from 5th and Walnut every night, and I'm not going to do that anymore," said Kelsey Lynch of Rittenhouse Square. 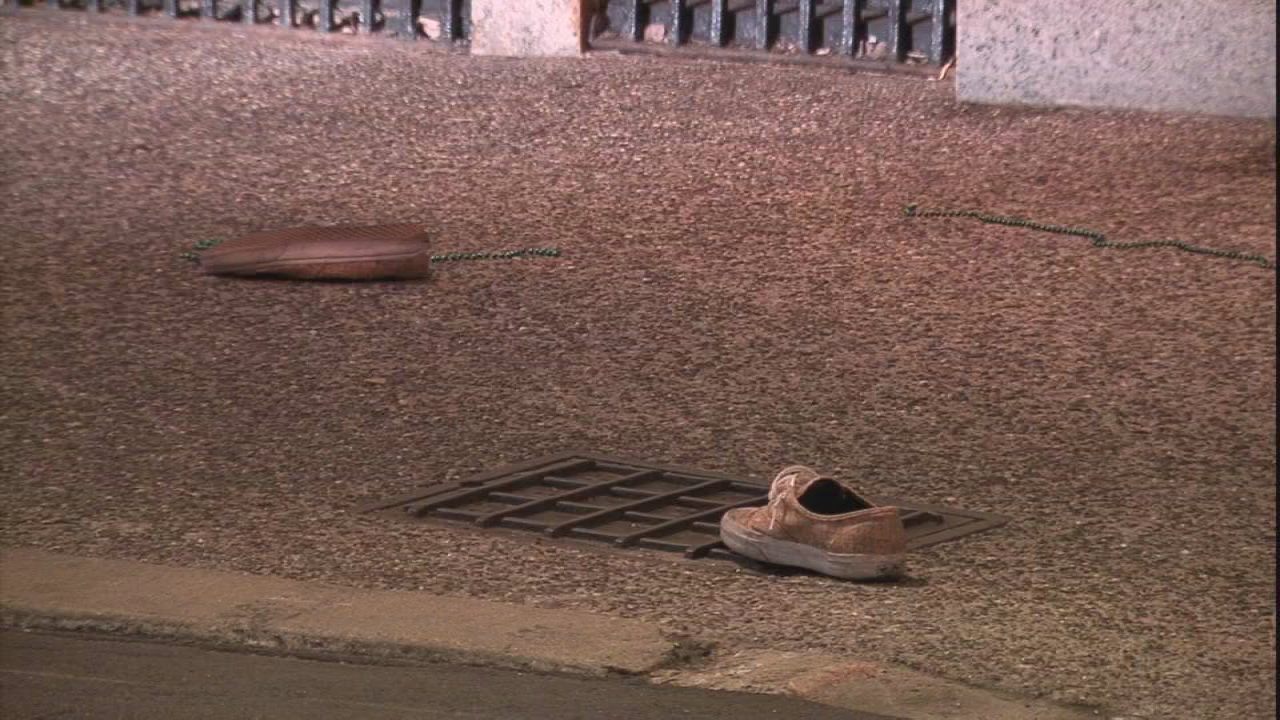 RAW VIDEO: Man stabbed to death
It happened at 3 a.m. on Sunday, March 13, 2016 in front of 1820 Rittenhouse Square.
Rittenhouse Square is a popular place for people to walk their dogs and play with their children.

Meanwhile, Hellander says her thoughts are on the man she tried to help.