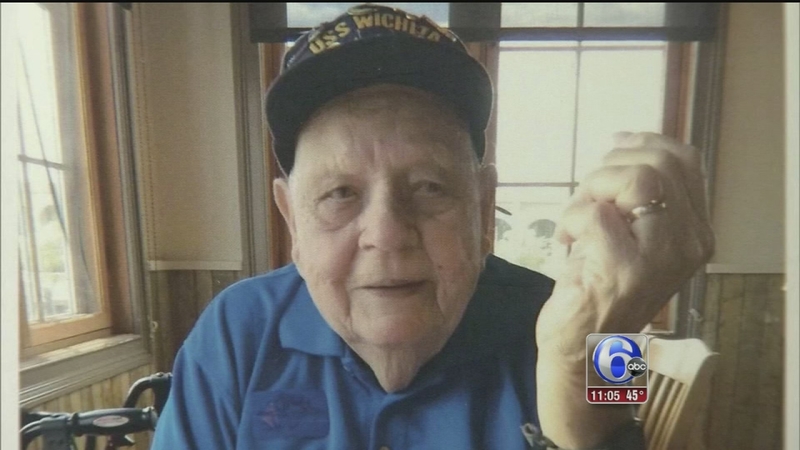 "Even when they sing the Star Spangled Banner, no matter where we were he would cry," said granddaughter Jeana Hagan.

"He was, if not the greatest, one of the greatest men I ever met," said grandson Tim Hagan.

The proud Navy seaman was rarely seen without his USS Wichita cap adorned with medals.

That hat along with his wedding ring is missing, stolen from a car just hours after his funeral.

"To have that stuff taken for, you know, no reason, it's a gut punch" said grandson Terry O'brien.

Funeral Director Lisa Miller says she accidentally left the bag inside her locked minivan outside McBride Funeral Home on the 2300 block of East Cumberland Street.

"They took the time to empty the bag and left the bag," said Miller.

She believes a man seen in surveillance footage is the person who took off with Joyce's possessions.

"I feel terrible. I feel it was left in my care and this happened," said Miller.

Philadelphia police collected the bag to fingerprint while Miller is turning to social media to get the word out.

"I put this on Facebook and it's been shared 125 times so far," said Miller.

Priceless for the family who now pleads for the return of their grandfather's prized possessions.

"Just give us the hat and the pins back and the ring," said Jeana Hagan. "That means more to us than anything."
Related topics:
audubontheftnew jersey newsnavyveteran
Copyright © 2021 WPVI-TV. All Rights Reserved.
More Videos
From CNN Newsource affiliates
TOP STORIES