WPVI
FAIRMOUNT PARK (WPVI) -- Three people are hospitalized after an accident and fire involving a stolen vehicle in Fairmount Park.

The crash occurred around 5:56 p.m. Wednesday on the ramp to I-76 eastbound near Montgomery Drive.

Accident on I-76 eastbound at Exit 341 - Montgomery Dr/West River Dr. There is a traffic disruption.

Police say two males, operating a car reported stolen out of Northeast Philadelphia, were traveling eastbound on the Schuylkill Expressway at a high rate of speed and struck a Toyota RAV4 that was on the exit ramp.

The two men fled the scene, but were apprehended nearby, police say. 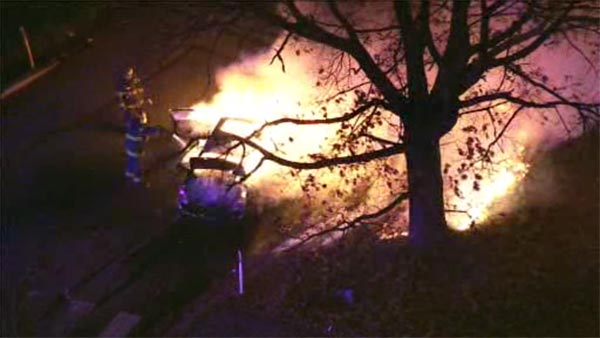 Chopper 6 was over the scene as firefighters worked to put out the blaze.

The three occupants of the Toyota RAV4 were transported to area hospitals for nonlife-threatening injuries.

Kobe Bryant, daughter among those killed in California helicopter crash