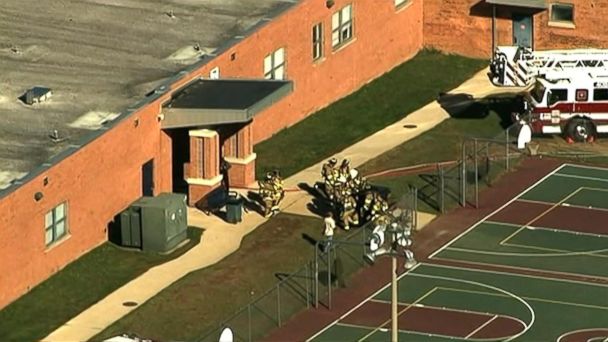 "A big fireball shot like, sideways, out of the class," sophomore Daniel Dorlester said today.

Dorlester, who was in the lab at the time, said the teacher had been conducting an experiment on an open flame. He said that one girl's hair caught fire as shocked students watched.

"Someone at the end of the hallway was on fire," Dorlester said.

Emergency crews were dispatched around 9:40 a.m. and quickly extinguished the fire, thanks to the school's sprinkler system.

Shawn Crisp, a spokeswoman for the Fairfax County Fire and Rescue Department, said two students who were severely injured were flown to the Washington Hospital Burn Center in Washington, DC.

The three other students suffered less severe injuries and were taken to a local hospital. None of the injuries were said to be life-threatening.

"They did a magnificent job," police said of the school's students and staff. "They did exactly what we have asked them to do, which is notify 911, do what you can to prevent further harm and then thirdly, get out of the school."

ABC News station WJLA-TV said a teacher was also injured but stayed at the school. Authorities said the fire was an accident.

Students were evacuated to the football field as fire and rescue crews remained on the scene. Authorities did not know what was going on in the lab or what lab materials were being used. The identities of the students or teacher were not immediately known.