Couple finds veteran lying on the floor of VA 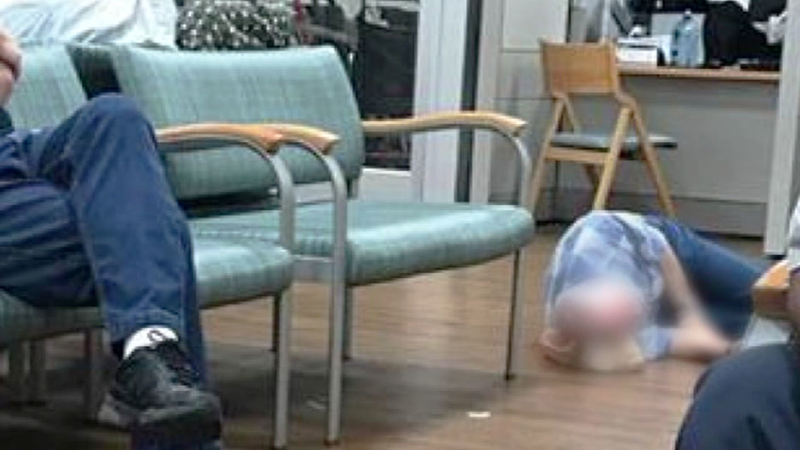 DURHAM, NC -- It's not hard to find stories of headaches -- and heartache -- when it comes to the VA. What makes this one different is it has pictures to go with it.

Marine veteran Stephen McMenamin and his wife, Hanna, moved to Raleigh from their home in Milwaukee a few months ago and already have amassed an armload of personal stories about long wait times at the Durham VA hospital -- both to get appointments in the first place and in the waiting room once at the hospital.

But they said it was what they saw Friday that moved them to take pictures and post them to Facebook.

"It was very upsetting," Stephen McMenamin said. He and his wife said they saw a handful of older veterans mistreated and ignored during the seven hours they were at the hospital, including an aged-veteran in a wheelchair.

"He had been sitting there for quite some time groaning and convulsing in pain," McMenamin said. "Almost to the point of where he was falling out of his wheelchair."

"He was visibly in pain," said Hanna. "And I think the thing with that that disturbed me so much was that there were people just sitting there acting like nothing was happening and he was sitting right in front of them and they were not even acknowledging that it was happening."

McMenamin says he and other patients asked if there was anything staff at the hospital could do to make the man more comfortable and were repeatedly told no.

After several hours, McMenamin says he offered the man a wheelchair he had been given.
"He sat in it for probably 15 minutes until the head nurse came around and kicked him out and said he can't do that, he can't be in that area. She was very rough with him and just completely insensitive," he said.

McMenamin and his wife say another veteran that caught their attention was an older man who looked deathly ill coming in but also was made to wait. After multiple times trying to get comfortable and being told he could not, McMenamin says he just lay on the emergency room floor.

"He just kind of laid down and said, 'I can't get up, I won't get up. Please get me a blanket until you can see me.' " McMenamin says security guards helped the man up after about five minutes and he was taken out of the waiting room.

"It's just horrible sitting in a room like that with people who could have been my grandfather," Hanna added, "in that much pain and having people not even react, it seemed like.

"The majority of the people working there were very nice to us. They were great," she added. "It's just that you have these people that don't care it seems like, and from what I've read from the comments, this is happening all over the place. You get people that just don't care for what they're doing and they feel like they can't be fired, so they just kind of get away with it. I just think it's unacceptable."
The Director of the VA Hospital in Durham, DeAnne Seekins agreed that anything short of respectfully giving top-notch care to veterans is unacceptable but wouldn't say that's what happened Friday.

Seekins said she called two of the three veterans the McMenamin's believed to be mistreated and told the I-Team that both thought they got great care at the hospital.

She said they hadn't been able to track down the third. But the I-Team did and the veteran, who didn't want to be identified to the hospital, said he felt like he got terrible care.

Regardless, Seekins released a statement saying in part, 'We take seriously any allegation of poor service. I was made aware of a regrettable incident that occurred in our Emergency Department over the weekend and am thankful someone cared enough to share the incident with us. Our mission is to provide the highest level of health care to Veterans, so upon learning of the incident, I took swift action. The employee was immediately removed from patient care pending the results of an internal review. We truly regret how this Veteran was treated.'

Seekins sat down with the I-Team regarding this story after it ran and had this message for veterans:

DeAnne Seekins, director of the VA Hospital in Durham, says they are here for veterans.