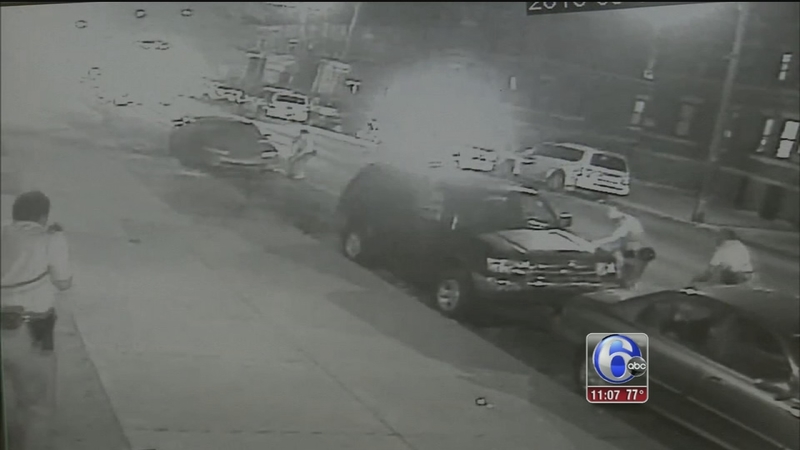 The suspect, identified by investigators as Nicholas Glenn, was eventually cornered in an alley and fatally shot by police.

In a press conference on Saturday, Commissioner Richard Ross said Glenn had "a pretty significant past" and "was well known to the police department." The suspect is believed to have acted alone and there's no indication so far that he had been radicalized.

"He was hell-bent on hurting a lot of people," Ross told reporters. "We still aren't absolutely clear as to why."

Glenn was found to be in possession of a note with the heading, "Doomed People," which police say indicated his hatred toward his probation and parole officers and police, among other unclear statements.

"Clearly, there's some issues that were going on there," Ross told reporters.

Police say 46-year-old Sgt. Sylvia Young, assigned to the 22nd District and a 19-year veteran with the Philadelphia Police Department, was working a patrol detail in the 18th District.

Sgt. Young was sitting in her patrol car, police say, when she was ambushed by Glenn.

The suspect fired at Sgt. Young at close range 18 times with a 9mm Ruger, striking her in the left shoulder, arm and torso area of her body, according to police.

One or two bullets were lodged in her bullet-proof vest, and her service weapon was struck twice, disabling it.

She was taken to Penn Presbyterian Medical Center in stable condition.

The suspect then passed Maximum Level Lounge, located on the 5100 block of Sansom Street, where he fired about five shots into the bar.

Both victims were taken to Penn Presbyterian Medical Center in stable condition.

Glenn continued to flee eastbound on Sansom when he approached a 2011 Nissan Altima, occupied by a 36-year-old man and a 25-year-old woman.

In the scanner audio from last night, you can hear the officers' reactions unfold right during the heat of battle.

The suspect fired multiple shots into the vehicle, police say, striking the man in his arm and chest and the woman multiple times in her chest.

Both victims were taken to Penn Presbyterian Medical Center where the woman was pronounced dead at 1:56 a.m. Her identity has not yet been released.

"Our hearts and our prayers go out to her family in particular as well as all the other victims," said Commissioner Ross.

Glenn then continued eastbound on Sansom. Two responding officers, assigned to the 16th District, were traveling westbound on the 4800 block of Sansom Street when the suspect fired at the officers, striking their vehicle. The officers were uninjured.

He continued to flee police when he was confronted in the 100 block of South 48th Street by University of Pennsylvania police Officer Ed Miller.

He was taken to Penn Presbyterian Medical Center where he was treated and released on Sunday.

A shootout ensued between Glenn and police officers. The suspect was shot multiple times and pronounced dead at 11:45 p.m.

Young and the three civilians hit by gunfire are all in stable condition and "good spirits," the commissioner said.

Philadelphia Mayor Jim Kenney spoke to Action News on his meeting Saturday with the police officers:

"I had the opportunity to be with both police officers this evening, and their families. One officer was cracking jokes with his kids and wife. The other officer was talking with her family. So we are happy, very blessed that that's the way it turned out. I think we have to keep them in our prayers. The civilians, there are some seriously hurt, and still in various degrees of being treated. And I think all in all it was really a terrible scary night. But our officers turned out okay, and hopefully the civilians will turn out okay."

"I cannot say enough about the response of the police officers last night. Absolutely remarkable," Ross said. "The restraint that they used is nothing short of miraculous."

Ross said the gunman was carrying at least three magazines and multiple live rounds. A relative of the suspect aided police in finding a location where investigators believe Glenn had been staying most recently. Inside, Ross said, police found more ammunition.

It was later determined Glenn discharged his firearm at least 51 times during this incident.

"This was a horrific night," the commissioner said. "He carried out one of the most violent acts in Philadelphia we've seen in a long time."