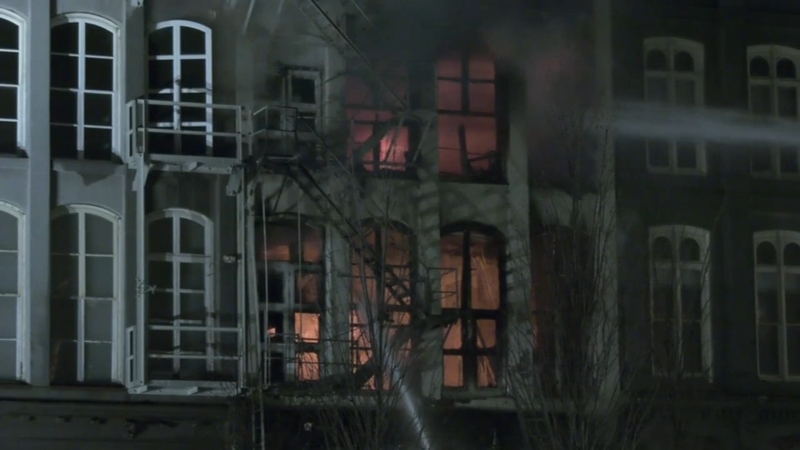 PHILADELPHIA (WPVI) -- A four-alarm fire that ripped through several buildings along a historic Old City block has been ruled an arson, officials announced on Friday.

On Friday, the Bureau of Alcohol, Tobacco, Firearms, and Explosives (ATF) said that the fire was intentionally set.

"After a complete analysis of the information obtained through the fire scene examination, collection of information and evidence from the scene as well as witness statements, ATF determined the fire to be incendiary in nature," said the ATF.
Dozens were forced to evacuate the buildings as a result of the blaze.

This was an utterly destructive case of arson.

They're the questions that haunt Al Gury as he returns to the spot he called home for 40 years, the 5th-floor apartment in the building.

"I avoid it. It's too painful because I keep thinking it may seem silly but the ashes of my animals are there," said fire victim Al Gury.

In the four-alarm fire, residents of 239 and 241 Chestnut lost everything they owned.

Gury's six cats and two parakeets died and hundreds of this art professor's paintings and drawings were destroyed.

A year later, the fire's burn is still felt in this neighborhood.

And the lack of foot traffic caused by months of demolition killed off one restaurant two months ago and is hurting Tina Hu's souvenir shop too.

We asked Hu if she sees much traffic come through. "No. That's why I'm closing early. Usually, I stay until seven or eight especially on Friday," said Hu.

Nearly a year removed, word from the ATF that the fire was intentionally set angers those who've lived through it.

"There were children up there asleep when this happened and they could have easily died very quickly," said Gury.

Hu added, "What kind of human being would do that to neighbors, human beings?"

Gury has since settled in an apartment nearby and hopes authorities can find out who's responsible for causing such pain.