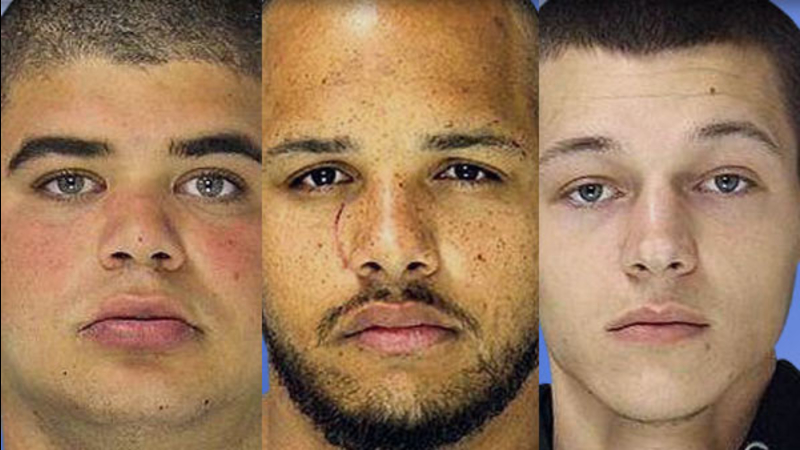 The incident happened early Tuesday morning on the unit block of Mill Road in Oley Township.

Eric and Jennifer Wegman say they and their 11-month-old baby had just moved into their home this past Saturday.

Eric says, "It was our third night there, and then about 1 o'clock Monday morning two guys burst into the house."

One of those suspects entered through the master bedroom, allegedly pointing a gun at the Wegmans.

That's when Eric grabbed his gun by the bed and opened fire. He then chased the first suspect down the stairs, only to find a second suspect on the first floor.

"When he heard me behind him, he began to turn around and raise his firearm up like he was going to shoot. I already had mine aimed so I fired again on him and he dropped his gun and ran out the door," he said.

Police say the two injured gunmen then fled in a getaway vehicle with two other men in the car.

Police say a Berks County homeowner turned the tables on armed intruders, shooting and wounding two of the suspects.

People who know the suspects identified them as 24-year-old Edward Martinez of Laureldale, 21-year-old Erick Green of Reading, 19-year-old Brandon Smith also of Reading, and a fourth suspect whose identity has not yet been released.

All four suspects were arrested. Police say the fourth suspect is still in the hospital and has yet to be formally charged in the case.

Eric Wegman was shot in the leg and is expected to recover.

Jennifer Wegman says her husband has become her and their baby's hero.

She tells us, "I am proud of him and I am proud that he was prepared and willing to defend us... I'm in the criminal justice field so I know that he (the suspect) wasn't going to say 'Oops, sorry,' and walk away. It was going to be us or them, and thankfully it was us."