The toys delivered Monday helped the family find a bright spot during their dark times.
WPVI
By TaRhonda Thomas and 6abc Digital Staff 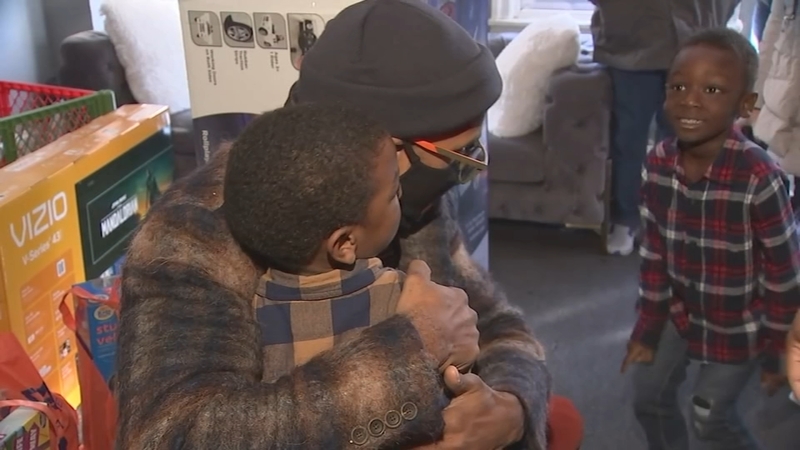 PHILADELPHIA (WPVI) -- As Philadelphia life coach Mel Wells unloaded boxes of toys from a van, he did so with a smile for a very special occasion.

"I'm gonna come with toys I actually like," Wells said as he walked the toys into a rowhome in the Mantua section of Philadelphia.

Wells was immediately met with shouts of 'wow!' from the 4-year-old twin boys inside.

Those twins, Cameron and Carson, had their world flipped upside down a month ago when their mother was killed.

"It's like I'm in groundhogs day over and over again," said the boys' grandfather Joseph Patton Sr. "I wake up and I can't hug my baby."

Patton's daughter, 24-year-old Sykea Patton, was shot to death on November 19. It happened as she was walking with her twin boys in the 800 block of North Preston Street.

Her ex-boyfriend has been arrested and charged with the murder.

Meanwhile, Sykea Patton's father and siblings have all stepped in to help raise the twin boys.

"It's hard and (the twins) ask questions. Reassure them 'she loves you,' and it's going to be okay," said Symiyah Patton, Sykea's younger sister who lived with her right next door to their father.

They say the family has received a lot of love and support from the community and from organizations like the nonprofit One Day at a Time (ODAAT), of which Wells is the president and CEO.

One Day at a Time is a resource for individuals and families impacted by challenges, including gun violence, drugs, and homelessness.

ODAAT staff members and volunteers went shopping at a local store to buy gifts for 50 families impacted by gun violence in Philadelphia.

"It's all about not just one day a year, but making an impact the entire year," said Wells. "It's about planting that seed of hope with the family and becoming part of the family as well."

Sykea Patton worked for the security company S&C Executive Protection. That company also provided support for the family by donating money and pledging to provide mentoring and support for the boys in the long term.

The delivered toys helped the family find a bright spot during dark times.

"I wasn't going to put up the tree but I made sure I did because that's what (Sykea) would've done," said Symiyah Patton.

The tree is topped with a star that the boys choose, stating their mother would have liked it.

Their grandfather says the twins will always be loved and in good hands.