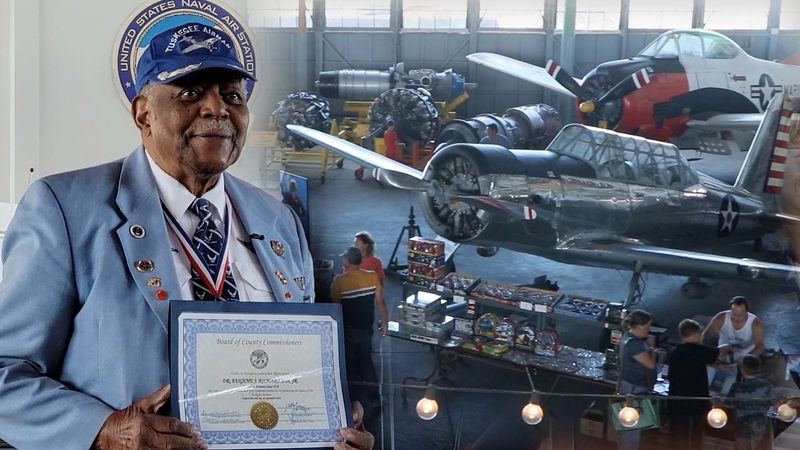 CAPE MAY COUNTY, New Jersey (WPVI) -- "When kids get into the airplanes and the helicopters, we are excited to tell them about the past," said Joseph Salvatore.

Salvatore, 91, has seemingly lived three lives. He served at Walter Reed National Military Medical Center with the United States Army. He performed over 3,000 operations as an orthopedic surgeon. But in 1997, he started his latest adventure building an aviation museum.

"This place was going to be torn down," he said. "They gave it to me for a dollar."

In the 1940s, a small farm community was taken over by the U.S. Navy to train dive bombers. Unfortunately, 42 men perished during exercises. When Salvatore saved their WWII hangar, he converted it into NAS Wildwood Aviation Museum.

"Since then, the place has taken off," he said, borrowing an aviation term.

This weekend marks the 25th annual Air Fest, where families can roam the campus and interact with military planes and helicopters. Live music and vendors populate the space to create an upbeat and educational atmosphere.

"It's, like, so cool to learn about history," said Luka Apostolovic after peering through the goggles in the cockpit of a military helicopter.

On Saturday, the museum welcomed a distinguished guest speaker, Eugene Richardson. In 1945, he graduated as a pilot in the group that would come to be known as the Tuskegee Airmen. Although it was too late to be deployed overseas, Richardson says the months of training provided an experience he always dreamed about.

Richardson, 95, delivered an empowering speech about the significance African-Americans played in wars throughout United States History. He received a certificate from the Board of County Commissioners and a coin from the Coast Guard Auxillary.

"No matter what the color is outside on the inside, we're all the same," he said.

His inspiring words touched all walks of life who gathered to listen.

"I've been a long term member of Naval Air Station Wildwood, so this is absolutely a thrill for me to have somebody of such status be able to come here today to speak," said Stephanie Garett from Philadelphia. "It gives so many people a different perspective on the roles that African Americans played and the fact that we have been involved in every single war in this country."

Others were grateful for the opportunity to thank Richardson for his service in-person.

"It's a rare opportunity to see a piece of living history," said Stuart Conover, who visits the museum every year with his son. "We have to pay attention to it and absorb it while it's still here before they're all gone."

On Sunday, September 5, Richardson is expected to visit Air Fest again and there will also be one more brief fly-over. Festivities continue until Monday afternoon.

To learn more about NAS Wildwood Aviation Museum and its programming, visit their website.

IN THE FAMILY: How a brewery saved Historic Cold Spring Village

A gem of Cape May County is going strong after 40 years. But if it was not for their brewery, Historic Cold Spring Village may not have survived the pandemic.