Questlove said he made his film for the "future Questloves as they're growing up in West Philadelphia."
WPVI
By 6abc Digital Staff 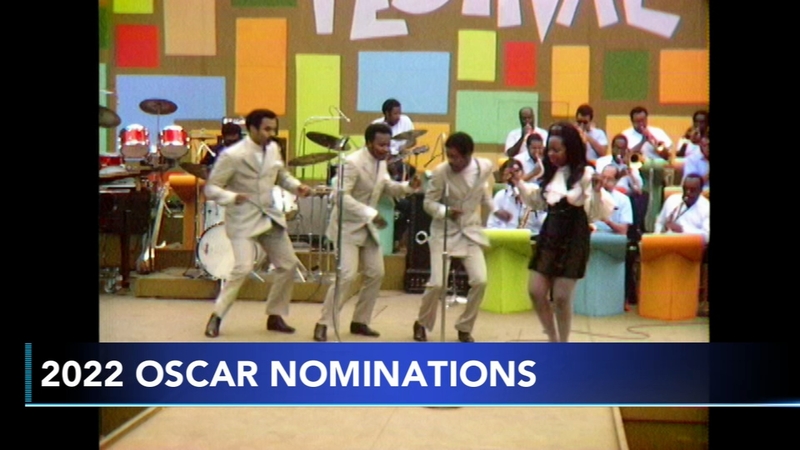 PHILADELPHIA (WPVI) -- The 2022 Oscar nominees have been announced and Philadelphia is well represented.

West Philadelphia native Will Smith is nominated for Actor in a Leading Role for "King Richard."

Other nominees in this category include Javier Bardem ("Being the Ricardos"), Benedict Cumberbatch ("The Power of the Dog"), Andrew Garfield ("tick, tick...BOOM!"), and Denzel Washington ("The Tragedy of Macbeth").

In an interview with "Good Morning America" in November, the father of three said, while the film was earning Oscar buzz, the real satisfaction has come from the opportunity to play such a complicated and dynamic person as Richard Williams, the father of tennis stars Venus and Serena Williams.

In a "GMA" interview in Philadelphia, Will Smith said that "there' a certain amount of sturdiness ... that gets created in what our beliefs are."

Williams, Smith said, "has been so vilified" for the way he parented his daughters, but upon delving more deeply into his story, the actor found himself thinking, "He was doing something right." When the opportunity to embody him in the biopic presented itself, Smith jumped at the chance.

"He was a lion that was protecting his kids and he didn't care what you thought. He would eat you alive if you tried to hurt his kids," Smith said. "I was very excited to portray that kind of fatherhood on screen."

Smith has been previously nominated for Best Actor for his roles in "Ali" in 2002 and "The Pursuit of Happyness" in 2007.

Ahmir "Questlove" Thompson of the famed Philadelphia musical group "The Roots" is looking to win an Oscar for Documentary (Feature) for his film "Summer of Soul (...Or, When The Revolution Could Not Be Televised)."

Other nominees include "Ascension," "Attica," "Flee," and "Writing With Fire."

It's Questlove's directorial debut. His documentary takes a look at the Harlem Cultural Festival in New York City in the summer of 1969.

It became a passion project for the West Philadelphia musician after he found out the event actually happened!

"First of all, to be told that this happened, and I thought that I was a music expert, I just felt dumbfounded," Questlove told 6abc. "I'm like, 'There's no way that Sly and the Family Stone and Nina Simone and Stevie Wonder, and like 30 other acts of their day, were at this festival. It was documented and just sat there for 50 years collecting dust."

So Questlove helped dust off 47 reels, a tedious process that resulted in glorious footage for his directorial debut. He also became a historian in the process.

"I felt that it was my responsibility to correct history and to really make it right for the future Questloves as they're growing up in West Philadelphia," Questlove said.

In the summer of 1969, while Woodstock grabbed all of the headlines in upstate New York, the Harlem Cultural Festival was happening in New York City.

Director and producer Adam McKay, who grew up in Malvern, Pennsylvania and attended Temple University, will be looking to add to his Oscar trophy case. His film "Don't Look Up" is one of 10 to be nominated for Best Picture. He previously won for Best Adapted Screenplay for "The Big Short" in 2016.

The Netflix film's description reads: "Two astronomers go on a media tour to warn humankind of a planet-killing comet hurtling toward Earth. The response from a distracted world: Meh."

Will Smith could win as a producer if "King Richard" triumphs in the Best Picture category.

"Nightmare Alley" starring Jenkintown's own Bradley Cooper is also up for the top prize.

On The Red Carpet took a deep dive into Guillermo del Toro's film.

Here's the film synposis: When charismatic but down-on-his-luck Stanton Carlisle (Bradley Cooper) endears himself to clairvoyant Zeena (Toni Collette) and her has-been mentalist husband Pete (David Strathairn) at a traveling carnival, he crafts a golden ticket to success, using this newly acquired knowledge to grift the wealthy elite of 1940s New York society. With the virtuous Molly (Rooney Mara) loyally by his side, Stanton plots to con a dangerous tycoon (Richard Jenkins) with the aid of a mysterious psychiatrist (Cate Blanchett) who might be his most formidable opponent yet.

The other nominated films include "Belfast," "Coda," "Drive My Car," "Dune," "Licorice Pizza," "The Power of the Dog," and "West Side Story."