Delaware Valley spring freeze is a shock to the system

Wind and cold air left behind snow and ice on Monday across the region.
WPVI
By Jaclyn Lee 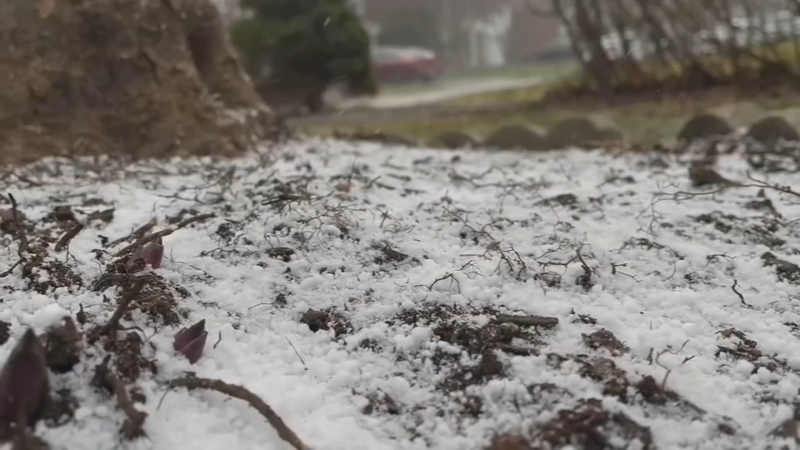 Delaware Valley spring freeze is a shock to the system

HAVERTOWN, Pennsylvania (WPVI) -- Quick-hitting snow squalls brought many to a halt around the Delaware Valley on Monday.

"Crazy," said Debra Amos of Wynnefield. "You couldn't even see your hand in front of your face. It was really freaky."

Wind and cold air left behind snow and ice, providing a shock to the system after the area enjoyed spring-like weather for the last few weeks.

"I think it's crazy in Pennsylvania and in March, there is nothing you can expect," said Sydney Gifford of Fairmount.

As this week's spring freeze continues Monday night into Tuesday, farmers in south Jersey are keeping a close eye on their crops.

"It's just messy," said Keshona Samuels of Bryn Mawr. "It was just snowing, which is surprising to me because it's March. When I looked outside, it was sunny one moment and then the next moment it is snowing."

Over at Taddeo's Greenhouses in Havertown, owner Michael Taddeo said the evidence is in the leaves. He said his magnolia tree was in full bloom the last few days until the cold front blasted the area.

"It's nothing new to us, the weather is always really wacky," said Michael Taddeo of Taddeo's Greenhouses. "March is funny. It'll be hot and then it will dip down again so we have to take preventative measures to combat that."

Some of those measures include bringing in all of the spring plants that were displayed out front.

"When it dips down to 10-15 degrees, the plants, like the people, they aren't happy," said Taddeo. "They wilt sometimes, they might die off. What we always tell people is either bring them inside, but if you can't, cover them with a bag to keep the wind off of them."

Meanwhile, Monday's snow squalls also claimed the lives of at least three people after a massive pileup on Interstate 81.

Dr. David J. Moylan, the Schuylkill County coroner, said three fatalities had been confirmed by late afternoon and that number could rise because fires were impeding rescuers.

Massive pile-up on I-81 in Pennsylvania (Credit: Mike Moye)