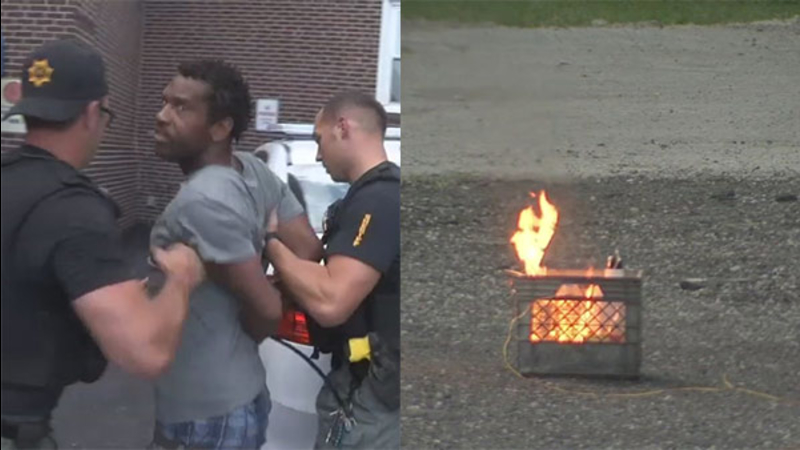 COLLINGDALE, Pa. (WPVI) -- A man accused of setting a Delaware County sheriff's deputy on fire surrendered to authorities after an hour-long standoff in Collingdale.

The suspect has been identified as Jeremy Jones. He faces an array of charges including five counts of criminal attempted homicide.

Multiple combustibles, including what authorities believe to be Molotov cocktails, were found in the suspect's apartment.

Officer has second degree burns on his leg. Authorities confirm suspect threw a malatov cocktail at the officer setting him on fire @6abc

It began around 4:30 p.m. Wednesday on the unit block of South McDade Boulevard.

Police were there to issue a warrant for a probation violation.

"And when they knocked on the door, my neighbor threw some kind of fluid or something, but fire came up, and they had to put the fire - the police officer out. He was on fire. They were rolling him around and stomping him on the street. Next thing you know, they start pulling out, drawing their weapons," Irene Winkle said.

Suspect surrenders after barricading in his home. Initial reports Collingdale police were trying to serve a warrant @6abc pic.twitter.com/RaFABYJh0s

The deputy suffered second degree burns to his upper leg and foot. He was taken to Crozer Chester Medical Center with non-life-threatening injuries.

The ATF spent the rest of the evening diffusing the other half-dozen homemade explosives.

"There's glass jars with what appears to be gasoline inside them with a lid and an accelerant type fuse, it would be a piece of rope or whatever, coming from the top," Collingdale Police Chief Robert Adams said.

Officers are telling residents to go back in homes, scene still not secure. 1 man did surrender @6abc pic.twitter.com/LxsSJfkLr1

Only Action News was there as Jones was hauled away into the police station.

"The guy is our neighbor. I know him very well. He's my friend," neighbor Levan Winkle said.

Levan Winkle says despite Jones' checkered past, this was out of character for his neighbor.

The sheriff's deputy is in stable condition. Action News is told his birthday is Thursday.