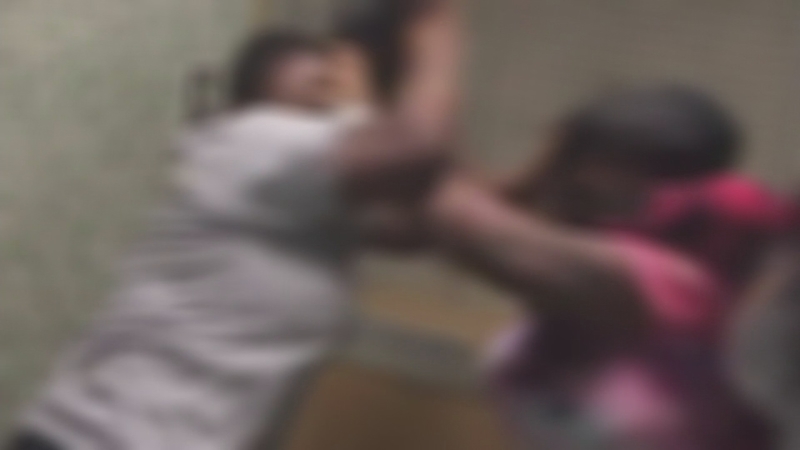 WYNCOTE, Pa. (WPVI) -- Extra security was place at Cheltenham High School on Thursday after a fight led to the arrests of four students and left eight teachers injured.

That security will remain in place this week and next week, the school district said in a statement.

Meanwhile, a meeting was being held between the school superintendent and teachers' union representatives to discuss what happened.

According to the teacher's union, they will present demands and suggestions about the ongoing problem of fighting in the school. The union rep says the staffers' concerns for safety have been ignored by the superintendent.

One of the students arrested is identified as 18-year-old Amber Nicole Lewis, a high school senior. She faces four counts of aggravated assault and conspiracy.

The other students are juveniles who who remained in custody as of Wednesday night.

Video shows the fight that erupted Wednesday morning, and it ends with a teacher being knocked to the ground, apparently unconscious.

The now-viral video shows the incident that happened around 7:30 a.m.

The video begins with two female students in a confrontation. Within moments, they begin to fight.

Not long after, two more girls can be seen fighting.

The nearly minute-long video shows the violence escalate, with the girls throwing punches and going to the ground.

At one point, a woman identified as a long-term substitute teacher intervenes in an apparent attempt to break up the fight.

She was then hit in the head, apparently by accident, and falls to the ground unconscious. She remains still and does not move before the video ends.

Police say the fight stemmed from some type of incident that began on Facebook.

Sources: Teacher hurt during fight at Cheltenham High School. Walter Perez reports during Action News at Noon on May 3, 2017.

Of the eight teachers injured, four were sent to the hospital. One has a dislocated shoulder and two suffered concussions, including the long-term substitute.

Meanwhile, we spoke with several students and parents who say that not only is fighting a lingering problem at Cheltenham High, but there were one or two more fights later Wednesday.

They say that's in addition to at least a dozen more fights over the past four weeks.

"Around 15 I'd say, but there's been a lot. I've been here four years and it's just exponentially growing," said senior Andrew Crosby.

"I'm surprised that it's never been covered until finally there was video evidence of what's going on in that building," said parent Christopher Dean.

The substitute has been released from the hospital, but a union representative says she's in bad shape.

In a earlier letter to parents, Principal Ray McFall said fighting will not be tolerated, and had strong words about those who record fights on video, saying "Those who are found to have filmed a fight will meet with swift disciplinary actions."

"This morning's incident, is without doubt, a gross violation of our code of conduct and therefor completely unacceptable. I ask that every single parent have a serious conversation at home this evening about student stressors and appropriate management of them; violence is never a viable option," McFall's statement reads.
"Students who are experiencing extreme conflict and stress must seek out an adult and deal with it appropriately in a timely manner before the stress erupts into a fight as it did this morning."

RAW VIDEO: Chopper 6 was over Cheltenham High School after a reported fight on Wednesday, May 3, 2017.