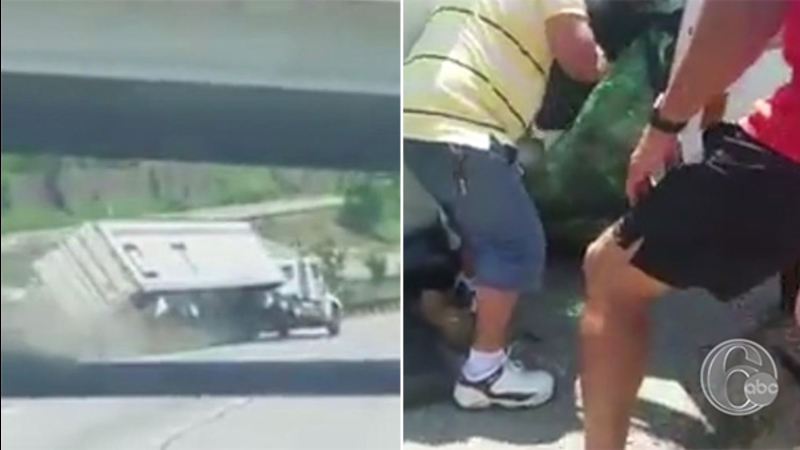 BROOMALL, Pa. (WPVI) -- Action News has obtained incredible viewer video capturing the moment a tractor trailer overturned on the Blue Route, and the effort of Good Samaritans to rescue the driver.

Troopers at the Pennsylvania State Police barracks are still investigating, but now this gripping video may shed some light on what exactly happened.

The video shows the point of impact when a tractor trailer flipped over, ultimately shutting down the highway for about seven hours.

This video was sent to Action News through our Facebook page. Send us your videos on social media using #6abcAction

"I'm still in shock it was happening in front of my eyes," said Victor Alarcon.

Alarcon says for several minutes before he began recording the tractor trailer already looked like it was in trouble.

Watch the full video of the moment a tractor trailer overturned on the Blue Route, and the rescue effort that ensued.

"I said, 'Hold on. I think something is going on here.' Either he is playing around with an 18 wheeler, seems to be crazy to be playing around, or he is falling asleep at the wheel," said Alarcon.

Alarcon spoke only with Action News on Tuesday to describe what he saw and caught on camera.

The 18 wheeler swerved lane to lane on I-476 northbound approaching the Broomall exit.

"I kind of expected what was going to happen. Didn't want it to happen, but there was no way to stop it," Alarcon said.

Then about a minute and a half into his recording you see the violent crash.

"I thought he was dead from the crash," he said.

The truck hit hard, spewing fluids and the contents of the trailer across the road, completely shutting down northbound traffic Tuesday afternoon.

Alarcon, his father and another man rushed to the cabin, but said the man inside was non responsive.

"We couldn't get an answer from him. Even though we keep calling him, 'Are you ok? Are you ok?' He didn't answer," Alarcon said.

Alarcon says he doesn't think alcohol was involved. A tired driver behind the wheel may have been to blame.

"I didn't smell any alcohol or see any alcohol bottles in the cabin. So, I believe he probably fell asleep, tiredness. It was probably a long drive," he said.

Alarcon says when first responders pulled the driver out, he was breathing, but may have had a broken arm.