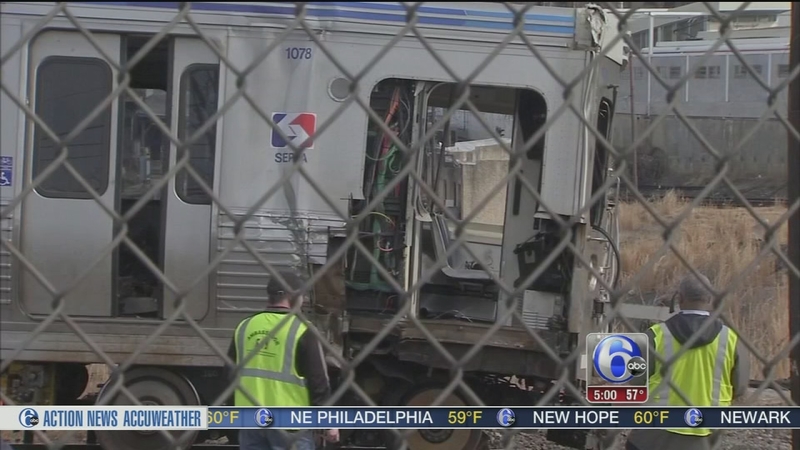 It was a slow tedious process to move the last of the damaged rail cars.

Once they were on the tracks, crews still had use metal saws and cutting torches to make cars safe to be towed away.

The 18 cars were moved to a nearby maintenance shop where they will be inspected by safety experts including investigators with the National Transportation Safety board.

Septa crews continue to work at site of collision in Upper Darby that left an operator critically injured. pic.twitter.com/zJbN7j3C1y

An operator remains in critical condition at Lankenau Hospital after the derailment on SEPTA'S Market-Frankford line. Three other people were hurt.

On Tuesday night, SEPTA could only share limited details now that federal officials with the NTSB are fully in charge of the investigation.

Still, they tried to reassure weary commuters that the trains are safe to ride despite repeated inconveniences and scares.

"We will not allow a train to get on the line if it is not safe," Scott Sauer of SEPTA said.

SEPTA officials say a moving train, El Car 57, collided with the rear of a stopped train, which had been waiting to approach the terminal, around 8:10 a.m.

After the two trains collided, the lead car of the moving train derailed and sideswiped a third train that was on the outer loop.

"I saw the second train pulling in and slowly stop then I saw three cars tip over," witness Douglas Moloznik of University City said.

It's unclear why the first train didn't stop. It was the operator of that train who was the most seriously hurt.

"The trains move under signal authority and the train signal system will keep trains separated. There is a manual override done from our control center if the need arises, but the control system should still keep trains apart," Sauer said.

The cause of the crash is under investigation. Each train had six cars, and a total of seven cars derailed.

This collision comes weeks after cracks were discovered in the metal of dozens of train cars, also on the Market-Frankford Line, forcing SEPTA to pull them. But SEPTA officials say the Upper Darby crash is unrelated.

The cars involved in Tuesday's crash have been around since 1996, and SEPTA says they were recently inspected.

The Action Cam was on the ground after out-of-service trains collided in Upper Darby, Pa.

Officials are looking into how fast the first train was moving at the time of the crash. The speed limit on the loop is 10 mph.

The Market-Frankford Line is a big people mover for SEPTA. On any given day, there are more than 180,000 rides, according to the latest numbers.

In addition to the problems on the Market-Frankford El, the commuter rails suffered signal problems late in the day and night, causing between 30 to 60 minute delays on five lines.

Frustrated passengers had to deal with the delays on the West Trenton, Fox Chase, Airport, Lansdale, and Paoli-Thorndale lines.