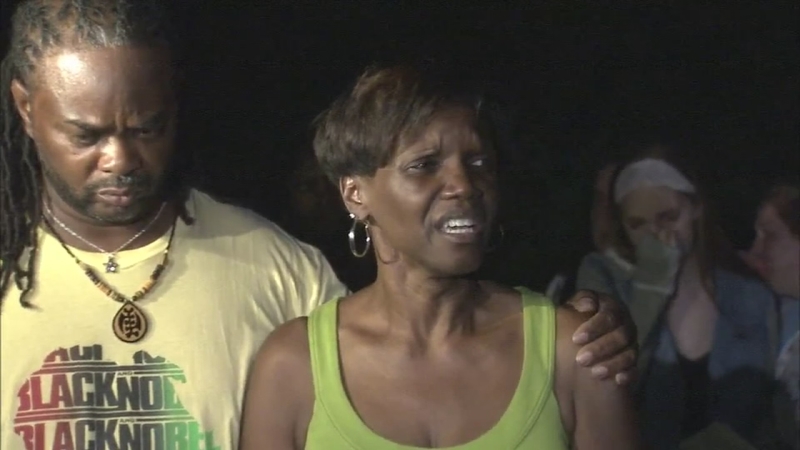 WESTTOWN TWP., PA. (WPVI) -- With candles in hand, dozens gathered for a vigil in honor of Bianca Roberson Friday night.

Through hugs and tears, friends and family shared about the promising life cut short.

"She was truly a great human being. And what happened to her is unspeakable," said Bianca's friend.

Family members watched from the balcony of the home where they got the news.

Roberson had been killed, a victim of apparent road rage.

"It's surreal. I can't pick up the phone, call or text her. It's surreal," another friend said.

"I expected so much greatness in her. I'm trying so hard not to be angry," said another friend.
Michelle Roberson said, "I don't know who did this. Why they wanted to steal my baby from me, parents, friends, neighbors. All I can say is thank you for being here showing Bianca how much she was loved."

In a late Friday news conference, police released a sketch of the suspect who allegedly shot Roberson as the two tried to merge into the same lane on Route 100 bypass.

"It was basically a cat and mouse game between cars," Police Chief Joseph Gleason said.

Roberson's car crashed into a tree. Blurry images show the suspect's red pickup show fleeing on the shoulder of 202, at Paoli Pike.

As police ask the public to keep to report what they know.

"We just hope this guy is caught, so he can be brought to justice for our daughter," Bianca's dad Rodney Roberson said.

The suspect is described as a white male, with blonde or light brown hair, in his 20s or early 30s.

If you recognize him, please call West Goshen Police.

Crimestoppers is offering a $5,000 reward for information.