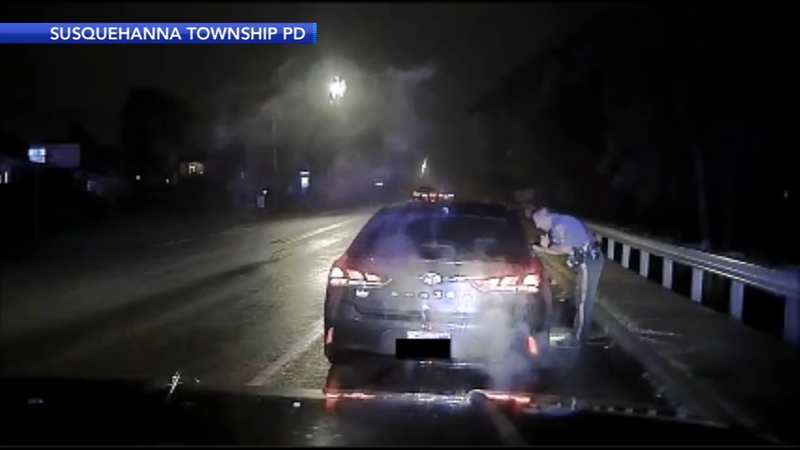 PHILADELPHIA (WPVI) -- When Corporal A.J. Somma made a traffic stop earlier this month in a town near Harrisburg, he was not expecting to make the day of a young boy. But he did just that.

Somma told 6abc it was back on October 3 when he was on patrol in Susquehanna Township, Pennsylvania.

It was raining and he noticed a car had just left a nearby church without its lights on. He pulled over the vehicle.

Somma said he would have wanted someone to do the same if it was his family driving on a rainy night.

"This traffic stop was no different than the dozens and dozens that myself and my colleagues make every month," Somma said.

He went over to the passenger side, which he tends to do during his traffic stops on this busy road.

Dashcam video released this week to 6abc showed Somma speaking with the family in the car.

In the video, Somma told the family, "Nothing's wrong. You're just driving with your lights off. Came out of church. You were so excited about hearing the word, you got the lights off."

A woman in the passenger seat told Somma, "This is my son's birthday. He said, 'Not on my birthday.'"

Somma then gave the young boy sitting in the backseat a fist bump.

The boy told him he was turning 9.

"You want me to sing 'Happy Birthday' to you?" Somma asked the boy.

The family laughed; the corporal went ahead and sang to the birthday boy.

"Not too good," Somma said of his singing.

They then invited Somma to their Bible study for the following night.

However, he told them he already had plans. Somma was attending the Thin Blue Line game at the town's local high school, honoring law enforcement that died in the line of duty.

Somma told 6abc that one of the officers being honored was Lieutenant Robert 'Bo; McCallister who was shot in 1981. He continued working until 2003. He passed away earlier this year at the age of 69 from complications due to the shooting and his death was classified a homicide, Somma said.

When it comes to being a police officer, Somma said, "It's not a job, it's a vocation."

The 29-year military veteran said his singing of "Happy Birthday" was just another way to connect to the citizens.

"We have a lot of interaction with the public. It's a diverse community. We go out to show we're not robots and not monsters, we're like their family members. We're just police officers," Somma said.

He wanted to show the 9-year-old that very message and thought wishing him a happy birthday would be a way to connect with the child. The video of the officer singing has been shared by many on social media since it was first released.

"We take great pride in what we try to accomplish in our interaction with citizens," Somma said.

The Susquehanna Township officer admits there are some "bad apples" across the country in the police force and knows that it's easy for all to be judged based on their mistakes and heinous crimes. But just like there are "bad apples" in the public, Somma said, he doesn't want to judge others based on them.

"You don't come into police thinking everyone is a criminal, but there are criminals in the public. We don't paint the community with one broad stroke," Somma said. "I don't want to be judged by what ten cops out of 1,000 do; I wouldn't judge a community out of the few knuckleheads out there."

What it comes down to, Somma said, is a simple fact between citizens and the police officers that serve them.

"We have more in common with them than they might realize," Somma said.

Somma is proud of the initiatives his department has begun over the years including forums where 6th and 10th graders at the local schools learn about their rights and how they should be treated by an officer during a traffic stop.

He said it's especially important because they are finding out that a lot of young people are relying on information from the internet or word of mouth from friends. He wants to makes sure the young generation is educated - and the same for the officers in his department.

"If we teach our cops the right way to do things, and ask citizens to comply, how is that not going to be successful?" Somma said.

The corporal also spoke about the department's campaigns, Honorable Endeavors - where they make contact with children about their choices after they leave high school - and Operational Visual and Protector - where police find unsecured car doors and alert the owners about the dangers of leaving their vehicles unlocked.

Somma said it's all about education and "how we can do our job better."

He fondly recalls Susquehanna Township Police Director Robert Martin's approach to community relations he started some 20 years ago. It was called 'park and walk.'

"We would park our vehicles and just walk around the community," Somma said.