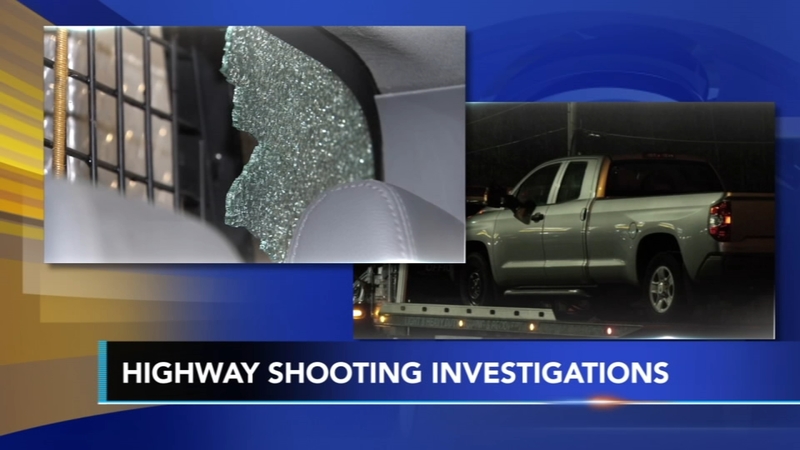 UPPER DUBLIN TWP., Pa. (WPVI) -- A 63-year-old man says he was driving on Route 309 in Montgomery County when another driver pulled up next to his vehicle and shot him in a case of suspected road rage.

It began around 9:30 p.m. Wednesday on the northbound lanes of Route 309 in Whitemarsh Township.

State Police say the victim, of Mont Clare, was shot in the right arm. He managed to continue to drive and came to a stop at the parking lot near the Pennsylvania Turnpike Fort Washington Interchange in Upper Dublin Township.

The driver told police he was turning right off of 309 going toward the turnpike when an older-style maroon sedan with New Jersey plates flashed past him on the shoulder, with someone inside firing a shot at him. He said the sedan then sped away, north on 309.

Some 3.5 hours earlier, an estimated mile to the east, while driving on the turnpike Charles Hayward had his own close call.

"I just heard a loud boom, like a gunshot," he said.

Hayward pulled over and called 911. As a trooper made the report Wednesday night, Hayward made a Facebook video of what happened to the truck that belongs to his employer.

"Somebody shot right here, here through my windshield. That's a gunshot," he said. "The bullet came through there, my GPS was right there."

The GPS was struck with such force Hayward told us it shot past him and shattered the rear window.

Hayward found the GPS and its screen is a mess. He said he realizes that with the difference of an inch or so he might have been hit. He is a grateful man.

"I went home and I just literally just kissed my kids, hugged my wife and thanked God," he said.

Anyone with information is asked to call the police.