Cat missing for 11 years reunited with owner in New York 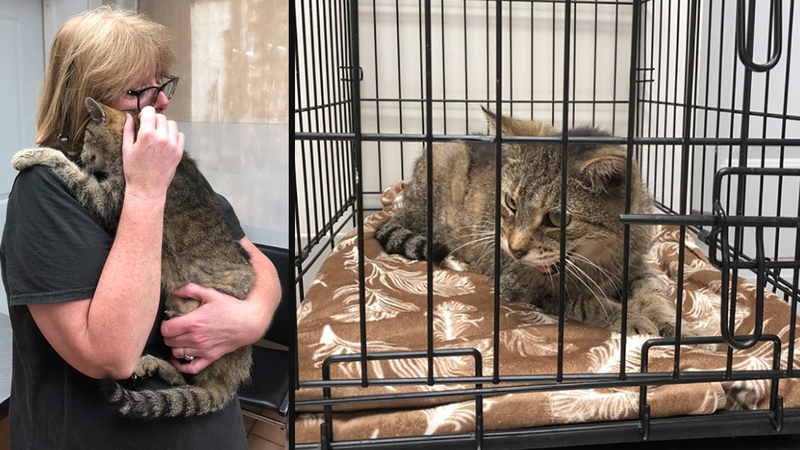 Cat missing for 11 years reunited with owner in New York

DUTCHESS COUNTY, New York -- A cat that had been missing for 11 years has been reunited with its owner in New York.

The kitty was rescued by the Dutchess County SPCA and found to be microchipped.

SPCA officials say it took staff member Carol O'Connell three years to get close enough to pet a stray cat that had been coming by her home every now and then.

"Each year he came to my house, he deteriorated more and more each year, and that's when I realized either somebody just abandoned him or he just was missing or lost or he was just a feral cat," O'Connell said. "This spring he started to come around a little bit more in the mornings so I started to work harder to try to gain his trust."

They say that on a whim, she borrowed a scanner from the shelter and discovered the cat was chipped.

With the information from the chip, they were able to locate the owner, Maggie Welz, who had been without her beloved feline for more than a decade.

"Unfortunately somebody opened our door and he ran away and never returned," Welz said. "So we were heartbroken and we ended up a year later moving to another house about 10 houses from that house and we told those owners to keep an eye out for him but he never returned."

After getting checked out and given a clean bill of health, Tiger and Maggie were reunited Thursday.

Although she was dumbfounded by reuniting with Tiger again, Welz said there was never a doubt in her mind that she would take him back home.

"At that point we determined that he was coming home, we had made a commitment to him and we wanted him to come back home to us," Welz said.

Officials say he was in remarkably good shape for having been on the streets that long.

Now, he is back with his family whom he had not seen since he was 3 and Welz said she owes it all to Carol and her son.

"I can't tell them how grateful I am to them for their persistence and their dedication and for making sure that our cat was OK," Welz said. "I have no idea where he was for the years in between, I'm sure he could tell us many tales, but the thing is that he is now home with us and he will be with us for the remainder of his life."
Report a correction or typo
Related topics:
pets & animalsdutchess countypetcats
Copyright © 2022 WPVI-TV. All Rights Reserved.
TOP STORIES
Uvalde school shooting: What we know about 19 kids, teacher killed
19 children, 2 adults killed by gunman in TX school shooting
Officer in Walter Wallace shooting killed in Philly motorcycle crash
NJ man, puppy recovering after vicious attack by neighbor's dog
'Many, many gunshots': Man walking dog killed in Port Richmond
Bar announces changes after fatal punch in Center City
Family identifies student stabbed at Coatesville High School
Show More
Watch Steve Kerr's raw, emotional plea after Texas shooting
Matthew McConaughey: 'We must do better' after massacre in hometown
How to talk to kids about Texas school shooting
Biden to sign policing order on anniversary of Floyd's death
Bicyclist struck by hit-and-run driver in East Falls
More TOP STORIES News