"Police out here! Come to the front door!" a member of the SWAT unit could be heard shouting. 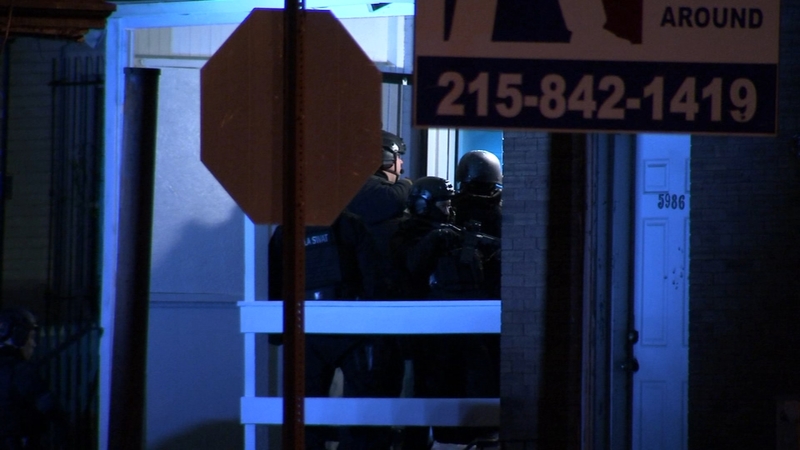 A domestic dispute triggered a barricade situation early Thursday morning in the Logan section of Philadelphia.

It all began to unfold around 1 a.m. Thursday on the 5900 block of North Norwood Street.

The Action Cam was on the scene as SWAT arrived, used a battering ram to open the front door and ordered the suspect to come out.

"Police out here! Come to the front door!" a member of the SWAT unit could be heard shouting.

Police say the man held a woman inside for an hour before releasing her.

That's when SWAT responded and removed the man from the home.

Both were being questioned by police.

Another standoff situation in Philadelphia ended peacefully a few hours prior.

Police say the suspect is in custody after he held a 13-year-old girl hostage.

The events started around 7:30 p.m. when officers responded to a home on the 6100 block of West Columbia Avenue in Overbrook.

Investigators say the 21-year-old suspect was pointing a gun at the teenage girl while live-streaming on social media.

The SWAT unit was called in. After hours of negotiations, the suspect let the girl go and surrendered just after 10:30 p.m.

Police say the girl, believed to be the suspect's cousin, was not injured.

"She was very scared, very shaken up," said Philadelphia Police Chief Inspector Scott Small after the girl walked out of the residence.

Investigators are still working to determine a motive, but believe the suspect may have been under the influence of drugs or undergoing a mental health crisis.

The SWAT team searched the house and was able to get everyone else out.

Three people were shot in Southwest Philadelphia then the SWAT team showed up for reports of a barricade situation.

But when the team arrived, the shooter and the victims were gone.

It happened on the 5800 block of Trinity Street just after 11 p.m. Wednesday.

Officers responded to the initial reports of gunfire.

They arrived to find evidence of shots fired, but the victims were elsewhere.

"They noticed there were several shot casings on the porch. They observed people moving around in the house. They tried to knock on the door and make contact with them. Initially, they didn't want to comply. So we made it a barricade; SWAT came out," Green said.

The SWAT team searched the house and was able to get everyone else out.

Police say there were children inside the home.

Officers later learned the three gunshot victims transported themselves to the hospital. They are in stable condition.