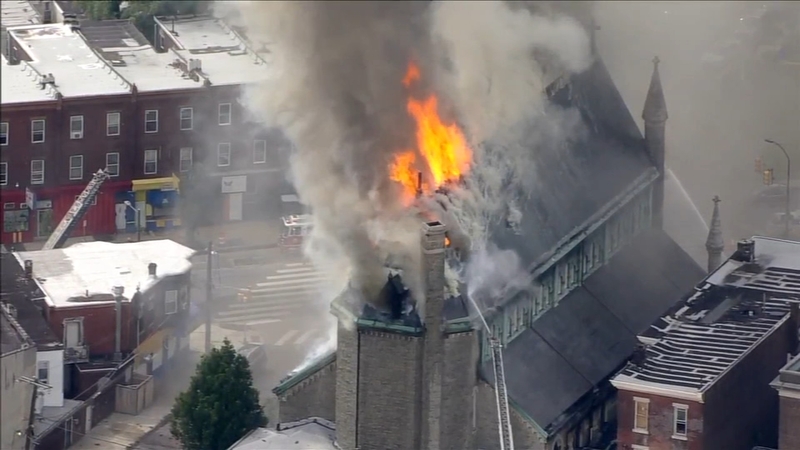 The three-alarm blaze erupted at the Greater Bible Way Temple at 52nd and Warren streets just before 3 p.m. Tuesday.

The view from Chopper 6 showed flames and smoke billowing from the top of the structure.

Firefighters battle blaze at church with daycare in Parkside. Chopper 6 is over the scene on August 27, 2019.

"I see the smoke and the next thing I know I ran over to get the people out of the lobby. They didn't even know the church was on fire," one witness tells Action News.

"I seen somebody on the roof with a propane tank and a hose," said Stanley Reed.

Action News has learned there were workers on the roof at the time of the fire. Witnesses say Benjamin Peterson, the pastor of the church, was trying to help the worker put the fire out but it got out of control.

"He immediately tried to rush up there on the second part of the roof to obtain the ladder and put it back up 'cause it already burst into flames," said Reed.

"He had the hose up there, just a little plain household one, trying to extinguish the fire," Reed added.

Firefighters worked feverishly to save the church that was built in 1904.

"We understand it's a historic structure so you could see, we're doing our absolute best to save as much of it as we can. It's a very high risk and dangerous situation," said Thiel.

The church also operates a shelter for about 15-20 senior citizens.

The Greater Bible Way Temple Church on N 52 in West PHILA continues to burn. Witnesses say work was being done on the roof when the fire broke out. @6abc pic.twitter.com/Ex4YRKoYNU

"All my belongings, all my family bags, my clothes, my boots, my sneakers, my refrigerator, my DVD player," said Barbara Sanders.

Pastor Peterson is said to be beside himself over what happened.

"The pastor is devastated, devastated about this, so he was very saddened," said Councilwoman Jannie Blackwell.

Ethel Peterson Johnson says her father started the church 62 years ago, the last 30 years at this location.

"I am devastated about the fire, but I'm thankful that no one was hurt," she said.

There have been reports that a day care inside the church was evacuated, but Thiel could not immediately confirm.

Church with daycare cotinues to burn in Parkside. The Action Cam captured the scene on August 27, 2019.

Thiel said some portions of the building had collapsed internally or into the street. There was no immediate word on a possible cause.

The Red Cross of Eastern PA and other local agencies are assisting firefighters and the church.

Firefighters have brought under control a blaze that engulfed a west Philadelphia church as reported by Dann Cuellar during Action News at 11 on August 27, 2019.