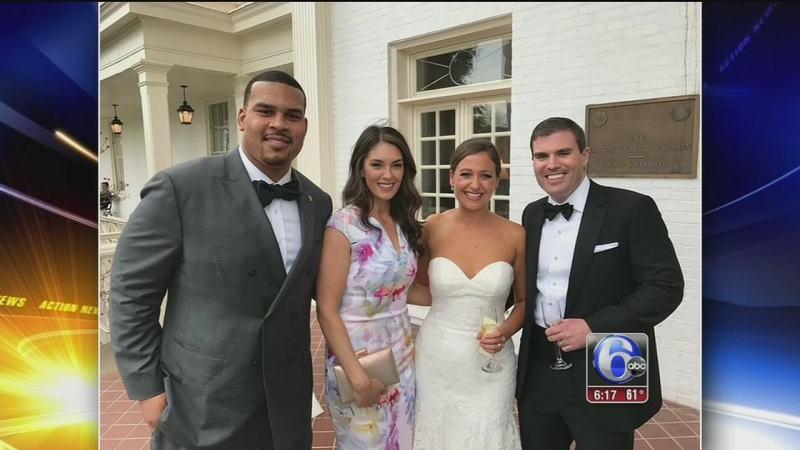 Unlike the movie 'Wedding Crashers,' Philadelphia Eagles offensive lineman Brandon Brooks was actually extended an invitation to a stranger's wedding.

The big surprise was that he accepted.

Eagles fan Geoff Lane reached out to Brooks because he's a fellow Miami of Ohio alum. Lane never expected him to actually say yes, though.

"I got the letter. I opened it. I noticed he was a Miami alum. I thought to myself, 'Why not?'" Brooks told reporters.

The fact that this wedding was actually in Ohio didn't matter to Brooks.

So Brooks sent in an RSVP, and booked a plane ticket.

"It was funny. He was like, 'I didn't think you were going to show up. I'm impressed you showed up,'" Brooks said.

Brooks did show up, posing for pictures with Lane and his new bride Marni along with their friends and family.

Lane told Action News that Brooks couldn't have been nicer. Brooks said the pleasure was all his.

"He had the nerve to write me the letter. That's good enough for me. I definitely knew I was going to go. The thing is I don't look at doing something like that, reaching out to the fans, as an exception, I kind of wonder why it's not the rule," Brooks said. "A lot of time, because of who we are, we get put on this pedestal, sometimes even we believe that we are larger than life, and at the end of the day, we put our clothes on just like everybody else. It was really my honor to be invited to the ceremony."

One thing's for sure, Brooks and his relationship with Eagles fans will be a happy marriage, indeed.