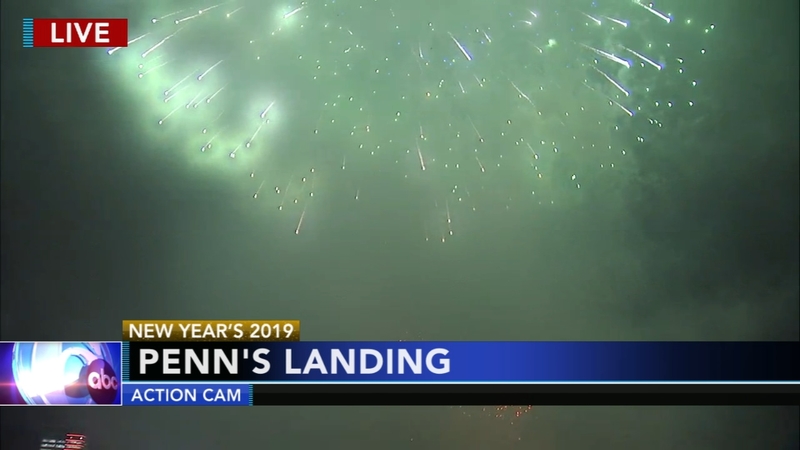 PHILADELPHIA (WPVI) -- People around the world are getting ready to ring in the New Year, and in Philadelphia, thousands of people will head to the Delaware River waterfront to watch fireworks.

The first of two fireworks displays over Penn's Landing Monday began at 6 p.m. The next show will be at midnight.

The theme of the show is Sing Along with the Movies. They played music from some of our favorites from Rocky to Purple Rain.

Ponchos and umbrellas are a must to watch the fireworks and ring in 2019 this New Year's Eve.

Greg Mote of Swarthmore said, "We thought that it only happens once a year and fireworks gonna go off no matter how much rain it is we thought we'd check it out."

Akeiyah Campbell of West Oak Lane said, "We're here for a good time, not a long time, so we're fine with it."

The crew from Pyrotecnico gave us a glimpse into their last minute preps. The same company has done this event for years.

"We have everything from large level effects to our larger shells which go up to ten-inch shells which break about 1,000 feet in the air to 450 feet wide," said Andrew Clemick of Pyrotecnico.

You can see the fireworks for miles in every direction, but it's fun to get a front row seat. So, people line up and watch on both sides of the Delaware River - they come to the RiverRink, they find a perch and they take it all in.

The shows are about 15 minutes long and are synchronized to soundtracks.
Reading Terminal Market was bustling on Monday ahead of the big party night. So, the cases were stocked at Termini Brothers Bakery - the cannolis, the cheesecake, there's no shortage of treats.

Philadelphia police say even with the rain they are expecting larger crowds tonight and tomorrow because it's significantly warmer than last year.

Philadelphia Police Deputy Commissioner Dennis Wilson said, "The fireworks is most of a patrol detail. We bulk up the traffic unit. We have a lot of parking restrictions and roads closed tonight and tomorrow."

And with New Year's Eve upon us, it means party planning is in its prime. At Giunta's Prime, they know what customers generally want for their New Year's Eve fare.

"Usually rib roast, filet roast, pork. You know, it's good luck for the New Year," said Robert Passio, owner of Giunta's Prime.
Indeed from the time the doors of the market opened, shoppers were snapping up the items they needed for their menus.

Some will stay at home to party, others will venture out, perhaps to one of the two fireworks displays on the Delaware River waterfront.

However it is you're celebrating, here's to a happy and healthy 2019!