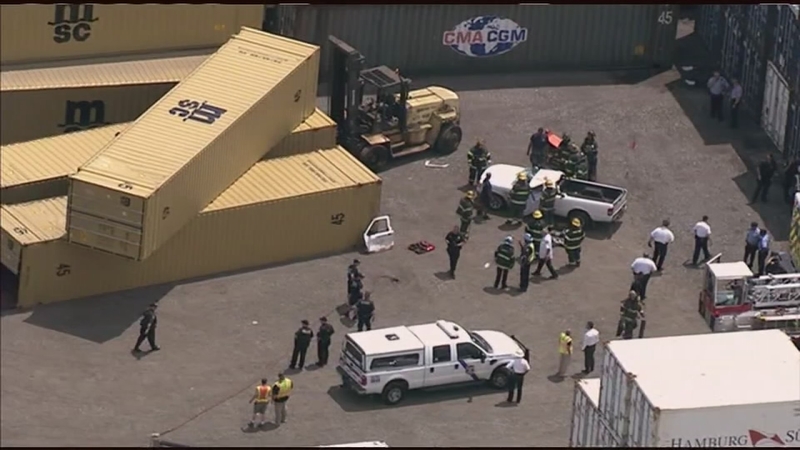 SOUTH PHILADELPHIA (WPVI) -- A man is dead after a cargo container fell on his pickup truck at the Packer Marine Terminal in South Philadelphia, police say.

The incident happened the terminal in the 3300 block of South Columbus Boulevard shortly after 12:30 p.m. Monday.

According to Port Authority officials, it appears what's called a top pick or top reacher, a piece of equipment that lifts the large shipping containers, knocked a stack of them accidentally.

Officials say one of the shipping containers came down on top of a small white pickup truck with a 52-year-old male employee inside. He was pronounced dead at the scene.

Ray, a longshoreman who declined to give his last name, said he worked alongside the man who died.

"I knew the gentleman and he was a very good friend of mine. Coming to work every day. Seeing him. So some guys had different reactions. I had my moment. I am gathering myself a little bit now and then probably it will come and go, cause I won't see him no more," Ray said.

Ray told Action News the victim was worked as a checker, someone who makes the rounds at the terminal counting containers and monitoring operations underway.

In the aftermath, OSHA, police, and fire responded to the scene. Trucks were turned away at the gate.

Ray says he is also worried about the man who operated the equipment that knocked over the storage container that crushed his coworker.
"I knew the operator, too. And I was told he started throwing up. I know him personally. Family guy, cares about people. I don't know how you recover from something like this," Ray said.

The pier closed immediately after the accident. It will reopen for operations Tuesday at 7 a.m.