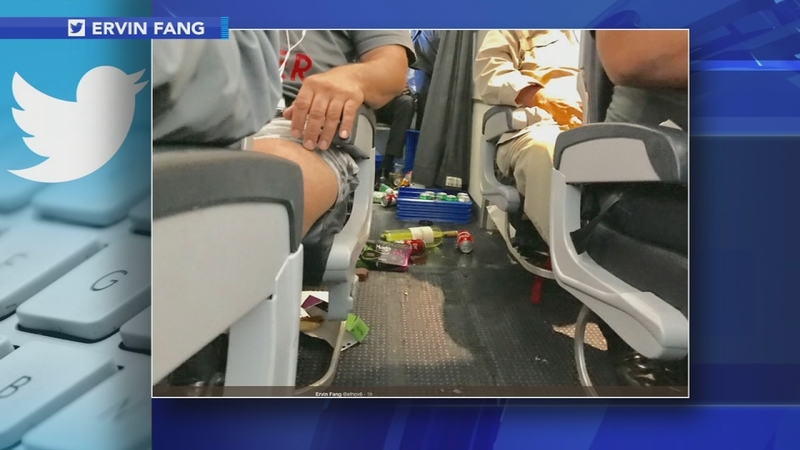 PHILADELPHIA INTERNATIONAL AIRPORT (WPVI) -- New video and images show what it was like inside a Philadelphia-bound jetliner that encountered severe turbulence Saturday.

"Ladies and gentlemen, this is your captain. We really apologize for that unexpected bump. We were expecting some light turbulence...it was just totally unexpected. We've asked our cabin to make an assessment, make sure everybody is OK. Again, we sincerely apologize. We don't anticipate any more of that. We want to make sure, as always, to keep your seat belt fastened."

Fang shot the footage, taken inside American Flight 759, just after the plane shook and dropped in extreme turbulence.

Flight attendants had just started serving drinks and people, beverages, and anything loose in the cabin went flying.

"I don't wait for things to happen, I just jump to action and try to assess and take care of things," Fang told Action News Sunday.

Two flight attendants were the first to be treated by doctors on board.

"The two flight attendants, one with a dislocated his shoulder, the other one had fallen hit her head and her shoulder. Those were the main ones. I think the other were head injuries, either they had fallen or got knocked around, hit their head on the cabin or ceiling," Fang said.

Dr. Fang says he worked with two other doctors to make sure there were no major injuries and the injured were stabilized.

"We made a makeshift sling so [one passenger] could support himself before the paramedics got on board," Fang said.

FAA officials say the flight crew reported severe turbulence while flying over the North Atlantic Ocean. The flight had taken off from Athens, Greece.

"American Airlines flight 759 from Athens, Greece to Philadelphia International Airport briefly encountered severe turbulence shortly before landing safely in Philadelphia. The seat belt sign was on at the time. Three passengers and seven crew members were transported to a local hospital for evaluation. We are taking care of our passengers and our crew members at this time and want to thank our team members for keeping our passengers safe."