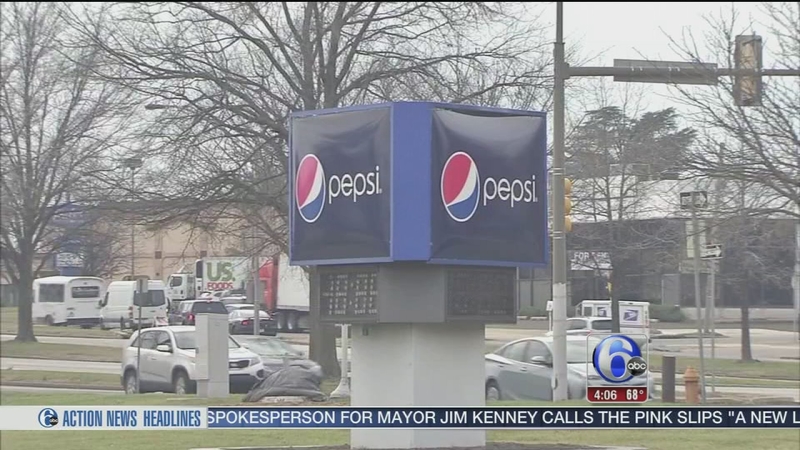 PHILADELPHIA (WPVI) -- Pepsi has confirmed to Action News that it is cutting 80 to 100 jobs in the area, and the company is blaming the city's beverage tax.

That number comes from a total of 423 jobs here, Pepsi said. Employees impacted include frontline and supervisory roles. The layoffs will happen over the next few months, beginning Wednesday.

The company has facilities in Northeast Philadelphia, South Philadelphia and Wilmington, Delaware.

The company said in a statement that Pepsi's beverage sales are down 40% in the city, and only up 10-15% in areas outside the city limits.

"This isn't something we take lightly or want to do, and we are committed to working with our employees and the union to treat impacted individuals with the care and dignity they deserve," the statement reads.

Some of the revenue from the beverage tax is intended for pre-kindergarten programs in the city. City spokesperson Lauren Hitt said that PHLPreK has created 251 jobs.

That includes 147 full-time and 44 part-time teaching positions, in addition to 60 support and administrative positions.

Hitt said the soda industry has "sunk to a new low," and accuses Pepsi of holding jobs "hostage" in an effort to overturn the tax, saying the company reported billions in profit last year.

"The idea that they can afford to do that but 'must lay off workers' should make every Philadelphian very skeptical of whether these layoffs are actually due to the tax," Hitt said.
Teamsters Local Union 830 Secretary-Treasurer Daniel H. Grace said this is "terrible news" for members who "rely on a strong soda industry for their livelihoods."

"We predicted this dire outcome from the outset. We pleaded with City Council members and our fellow union brothers and sisters in Philadelphia to stand with us against this outrageous tax, but to no avail," he said in a statement.

In late February, Mayor Jim Kenney announced that the beverage tax raised $5.7 million in January, more than double what city officials had projected.

Pepsi did say that if the tax is repealed or struck down, it will bring people back to work. Other companies - including bottlers and supermarkets - have also said the tax has resulted in slumping sales and layoffs.