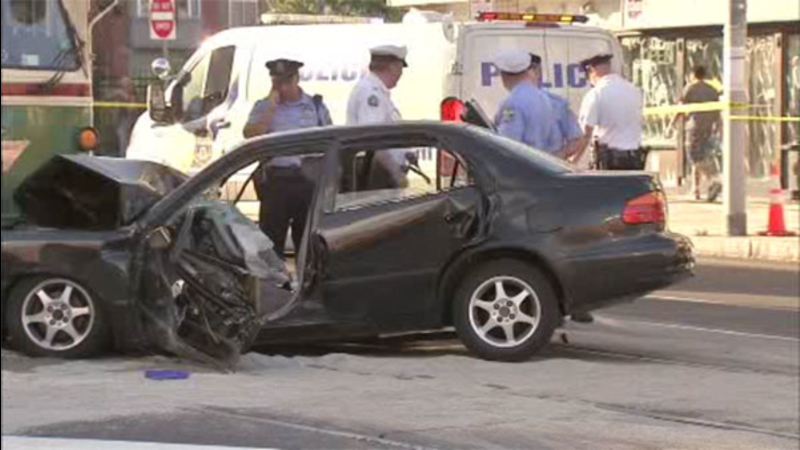 NORTHERN LIBERTIES (WPVI) -- A 36-year-old woman is dead and two children were taken to the hospital after a trolley and vehicle collided in Philadelphia's Northern Liberties section.

It happened around 4 p.m. Wednesday on West Girard Avenue.

It is not immediately clear if the victim saw the trolley or was distracted.

Police say the trolley was coming eastbound, and the driver in a Chevy Prism was traveling west.

They say it's likely the victim's car crossed the median and collided head-on into the trolley.

April Plant of Fishtown, a close friend of the victim, stood in disbelief at the contorted car.

Plant said, "You wonder how did it happen, and it's right across here. Look at the car, it's mangled."

Police are withholding the victim's name until her relatives can be told what happened.

"It's horrifying, it's scary," Plant said.

Another friend said, "It took my breath away. I see the girl every day, I'm with her every day."

The impact of the crash was so powerful, the hood is now an accordion, and the windshield was shattered.

One friend, who did not want to be identified said the victim was babysitting two young girls - an infant and a toddler.

A police source close to the investigation tells Action News that neither child was buckled in.

Deputy Fire Commissioner Gary Loesch said, "It is right outside of a fire house. We literally had members on the scene within seconds."

That proximity helped to save both children, who were immediately rushed to area hospitals with minor injuries.

A passerby said, "My God, but then when you see a baby's carrier there, you're going to think that baby first because that baby can't do for themselves."

Others passing by the crash marveled in horror at the scene as police tried to piece together how and why the driver crossed the median.

Police sources say they're looking at speed and whether the driver was under the influence.