Mayor: No decision yet on Rizzo statue's future 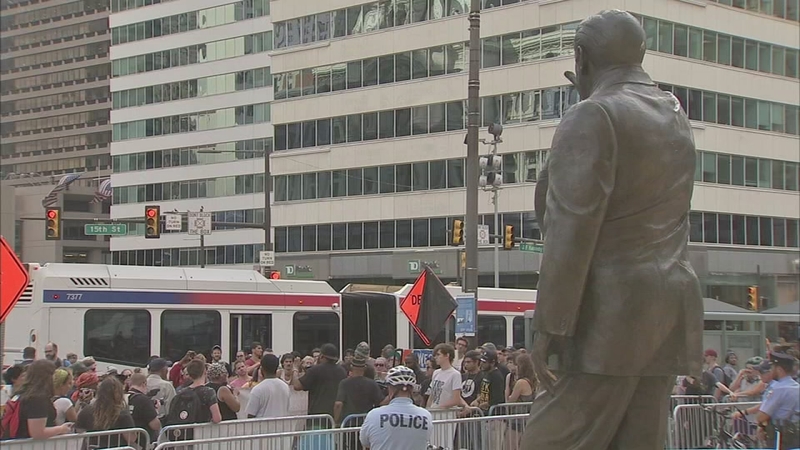 CENTER CITY (WPVI) -- The Frank Rizzo statue is back in the spotlight.

"Symbols like the Rizzo statue are a symbol of violence, oppression, racism, and needs to come down," Christian Lovehall of South Philadelphia said.

Rizzo, once a top cop turned Philadelphia's mayor, is often associated for having a strained relationship with the African American and gay communities.

"Frank Rizzo, and I knew him personally, was not a racist. Rizzo was a law and order officer, had nothing to do with racism," Street said.

Mayor Jim Kenney says no decision has been made on whether to remove it, keep it, or relocate it.

Kenney did confirm he agreed to a meeting with those who want the statue to stay.

"The reason I agreed to do it was because they agreed to call off a rally that could have potentially been a dangerous situation for lots of people," Kenney said.

Kenney says by not having the two groups rally at the same time, police have a better chance of doing their jobs.

Mayor Kenney did say a decision on the statue is going to come soon.

According to Kenney, the longer there isn't one makes the greater chance there is for violence breaking out.

"I don't want to see people angry and hurt, physically hurt potentially, over a piece of metal," Kenney said.

The statue has been egged and spray-painted twice in one week since Councilwoman-at-large Helen Gym called for its removal.

She released a statement Monday saying, "There will be a city led public process for moving the Rizzo statue."

Though the statue was surrounded by those who want it gone, hours earlier, Logan resident Dianna Canery spoke to Action News about watching Rizzo rising through the ranks. She wants the statue to stay.