Comedian and Philly native Kevin Hart honored in his hometown 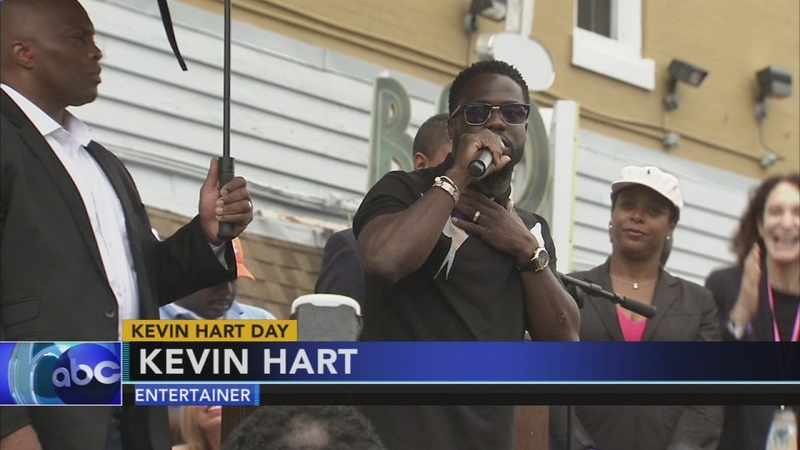 TIOGA (WPVI) -- Undeterred by the rain, Philadelphians showed up for what turned out to be a birthday block party for one of Hollywood's biggest stars and one of Philly's own.

Actor and comedian Kevin Hart visited his hometown and Tioga neighborhood to be honored with a mural dedication just above Max's Steakhouse at Erie and Germantown avenues.

You know I had to do it 😏 #kevinhartday @6abc pic.twitter.com/ox9dNDbnhA

"This is probably the biggest honor that I have gotten in my career to date," Hart said.

It's an idea that was first tossed around by Councilman David Oh.

"I suggested a mural and he loved the idea," Oh said.

"Oh man, blown away, and nervous, but it was a challenge," Humprey said.

Kevin Hart's older brother, Rob Hart, jokingly pleaded with the crowd to not add anything to the mural.

"Do not write on my brother's mural for at least a month," Rob Hart said.

But no one was more impressed and humbled than Kevin Hart himself, who admitted that at times growing up, he couldn't afford a cheesesteak at Max's.

He's now the highest paid comedian in the world.
"I truly to believe that Philadelphia made me into the man I am today," Hart said.

The city also officially proclaimed Thursday "Kevin Hart Day" and presented him with the city's bell and his own Phillies jersey.

And though his success is largely due to his comedic genius, on this day it was also his love and charitable works for his hometown that earned him this recognition.

Kevin Hart says he will continue to represent his neighborhood and all of Philadelphia in his work. But in addition to giving back, he also hopes that his success will serve as inspiration to others especially in his hometown.